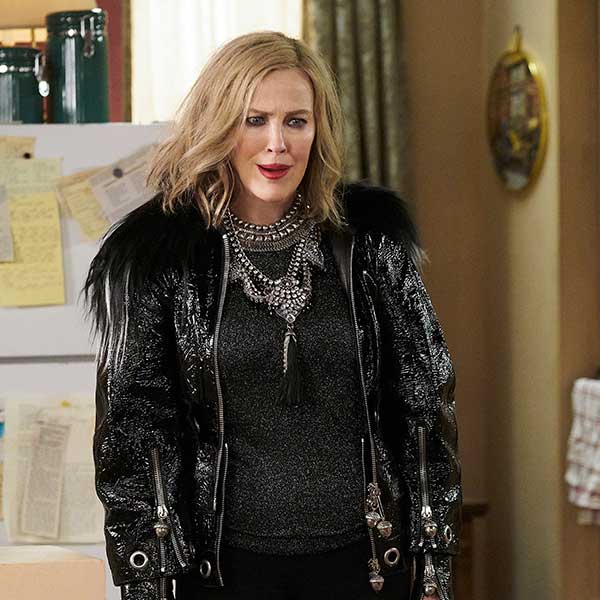 If you asked me to recap the first four seasons of Pop TV’s Schitt’s Creek, I’d sit there stammering and have to admit that I was too distracted by the jewelry to address the question accurately.

Costume designers use jewelry as a vehicle for storytelling, considering where and how the character might have acquired it, what draws her to the jewel, and what’s compelled her to wear it in whatever scenario is unfolding on-screen. Knowing this, there’s a lot of visual information to process in the case of Moira Rose, the former soap opera star finding her way in the hickiest of hicksvilles (aka the town of Schitt’s Creek) because of her family’s financial misfortunes.

The character, brought to life by veteran actress Catherine O’Hara, recalls a sort of latter-day Miss Havisham, only with more severe angles, an entire colony of wigs, and a Pierrot clown’s black-and-white palette. Her style narrative is crafted by the show’s cocreator Dan Levy (who also plays Moira’s son, David Rose) in tandem with costume designer Debra Hanson. Levy has said that they initially looked to Daphne Guinness, a great collector and lover of jewelry, for inspiration.

A little internet sleuthing readily confirms that Moira wears authentic designer fashion by the likes of Balenciaga, Givenchy, and Alexander McQueen—garments befitting her former stature as a crazy-rich Manhattanite. The jewelry designer credits are more elusive—Moira wears oversized, opulent, and definitely this-side-of-kooky statement necklaces that have me wondering whether I’m looking at a Kenneth Jay Lane, a Iosselliani, a Chan Luu, or a tongue-in-cheek cheap chic BaubleBar situation. Moira also wears vests to bed, fastened over silk pajamas, and marvelously accented with brooches.

I have to think the authorities would have taken Moira’s finest jewels as part of the confiscation of the Roses’ assets in the first episode, so my mind goes to faux and I start Googling, and next thing you know the episode is over.

Moira’s daughter, Alexis, played by Annie Murphy, isn’t as much of a fashion risk-taker, but she nails the bohemian millennial aesthetic in Isabel Marant and Derek Lam (and in one episode I am pretty sure I saw some Erdem for H&M). Her jewelry follows the stackable, delicate M.O. that her demo is obsessed with, but she has one heck of a distracting statement necklace—a sideways initial necklace that is, so the internet tells me, a High Street brand but seems very Maya Brenner or Jennifer Meyer in its execution.

While I wait for season 5 to land on Netflix via the CBC, I’m on to Amazon Prime’s The Marvelous Mrs. Maisel, in which the jewelry adds to the show’s vintage-shop veneer of over-the-top glamour infused with a candy-colored, almost cartoonish gloss of nostalgia with a capital “n.”

P.S.: Comment here or DM me on Instagram, @aelliott718, if you have any intel/thoughts on the jewelry credits for Schitt’s Creek or Mrs. Maisel.

Top: Catherine O’Hara as Moira Rose in all her fashionable glory on the hit TV show Schitt’s Creek, a Canadian import now streaming on Netflix (photo courtesy of Pop TV).