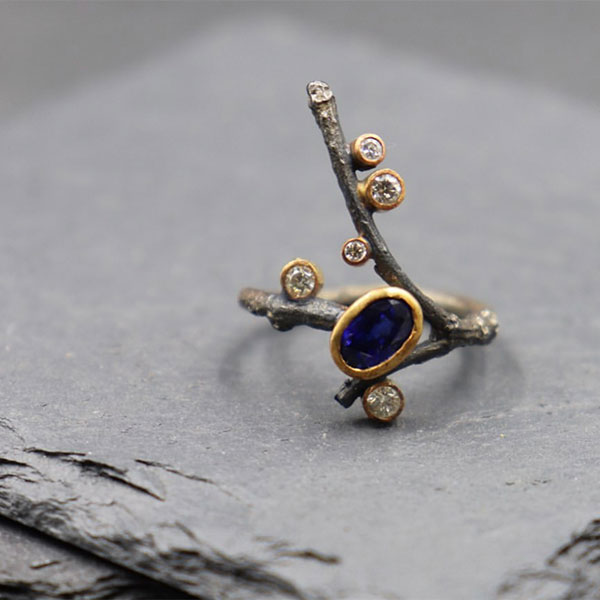 The practice of upcycling heirloom or unwanted jewelry to become pieces that feel more of the moment has gone from insider secret to growing mainstream trend.

And who doesn’t love a good jewelry makeover story? Probably one of my favorites was JCK‘s Brittany Siminitz’s epic engagement ring redesign by Single Stone.

And today, I’m highlighting another sapphire ring conversion, albeit one with an entirely different look.

Pictured at top is the after shot of the ring that designer and retailer Jamie Hollier of Balefire Goods recently created for a client: “She is a local artist that creates watercolor paintings and other pieces inspired by nature and wanted a piece that felt more tied to an organic style,” says Hollier, whose boutique and studio are based in Arvada, Colo.

Below, the story of how she brought her client’s vision to life.

“The original ring design was much more angular and hard-edged than what she was looking for,” says Hollier. “Plus, the side stones were all princess cut, which don’t lend themselves to organic and flowy designs as much.”

At the same time, Hollier was working with another client who wanted to make over her wedding set into something with a more mechanical/industrial feel. “She had mostly round diamonds. The sizes of these stones are roughly the same size as the princess cuts, so we were able to negotiate a trade between the two parties.”

To achieve the client’s desired look. Hollier created an oxidized silver ring that was hand cast from a twig and has gold bezel settings for the diamonds. The center sapphire was intended to suggest “an emerging flower bud,” says Hollier, and the diamonds around the band are “like drops of dew.”

Top: The final result, about which the client raved, describing the ring as a piece of “wearable poetry.”