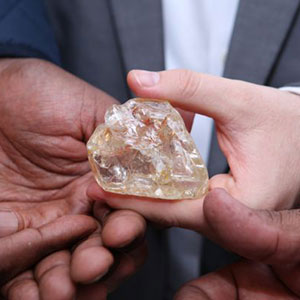 Martin Rapaport’s much-ballyhooed sale of the 709 ct. Peace Diamond (pictured, right) from Sierra Leone was in one way disappointing—its final price, $6.5 million, was well below what was hoped for and less than even a previous auction bid for the stone. But it’s possible that this auction will have significance beyond its final hammer price.

By generating tons of publicity for the auction and the beneficial effects this sale will have on the local economy, Rapaport drew attention to the larger concept of “ethical diamonds” from Africa. And he’s hopefully created a market for them.

“No [diamond dealer] is going to toss in another million bucks just for the hell of it,” says Brad Brooks-Rubin, policy director for the Enough Project and veteran of GIA. “That’s not the way the industry works. But kudos to Rapaport for going in the right direction and looking at how you actually develop a supply chain for these kinds of goods.”

The industry has long debated whether consumers will pay more for responsibly sourced diamonds. The success of Brilliant Earth has already answered that question. Blue Nile and James Allen also sell stones marked Canadian-origin. They aren’t doing that because consumers like maple leaves.

So far, with few exceptions, most of the diamonds sold as “ethical” are either Canadian and lab-grown. (Brilliant Earth does sell diamonds marked as Russian and “Botswana sort.” Forevermark also sells “responsibly sourced” diamonds, many from Africa, but it doesn’t specify their origin.) And there have been no attempts to market ethical, artisanally mined diamonds like has been done with artisanally mined gold.

Of course, it could prove a challenge selling ethical diamonds from Sierra Leone, the setting for the Blood Diamond movie. There will always be a certain amount of skepticism over where the money’s going; it’s not easy distributing money to the right places in a poor country. It also would rely on an artisanal sector notorious for low wages and poor working conditions. The pitch behind lab-grown is simpler: You don’t have to worry about any of this stuff.

We don’t know if the diamonds that emerge from the 709 ct. Peace rough will be sold in a way that marks their origin. The winning bidder was Laurence Graff, who this week announced he had scooped up another significant piece of Sierra Leone rough—the 476 ct. Meya Prosperity Diamond (pictured, below). 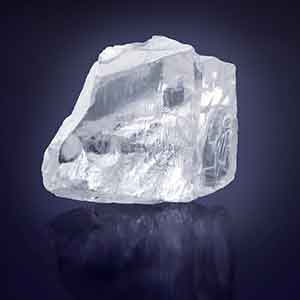 Graff is known as a savvy buyer. He also owns a significant retailer. More than just diamonds, he understands marketing and public relations.

Clearly, these two purchases mark a trend. It’s not clear what Graff is planning for these diamonds (a spokesperson was not available for comment) but he seems to be thinking about something. And if anyone can make a business out of this, he can.