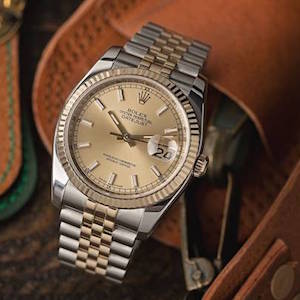 Rolex has given itself a raise.

At the beginning of the year, the Swiss watch company raised U.S. prices on its much-coveted watches by an average of 3.4%, according to jeweler sources who received communications from the company.

In recent years, the brand had generally held off on increasing its U.S. MSRP (manufacturer’s suggested retail price). But after another super-hot holiday, the increase was not unexpected.

One Rolex seller estimated that prices went up about 3%–6%, with stainless steel models getting the largest increase.

On A Blog to Watch, Ariel Adams also pegged the increases as being between 3% and 6%, and published a list of the reported increases.

Paul Altieri, founder and chief executive officer of Bob’s Watches, a Newport Beach, Calif., site that sells vintage watches, believes some of the top models went up as much as 9%, especially some gold watches, given that the gold price has been increasing.

“They haven’t raised prices in quite a while,” he says. “And it was kind of due. I was expecting a price increase last year, even the year before. I think this is a supply-demand situation. [With] most of the steel sport models, there is a shortage worldwide.”

He doesn’t think the price increase will meet much resistance in the market.

“Rolex is on fire,” he says. “People will gladly pay it. Most of these models are worth more on the secondary market anyway.”

He also doesn’t think this will start a trend.

“They are in a different ball game, being a private company. They march to their own drum. I think they will space [the price increases] out. We probably won’t see another for a few years.”

The increase seemed to have been higher in the United Kingdom, perhaps due to currency issues: According to U.K. publication WatchPro, prices there have risen 7.4%.