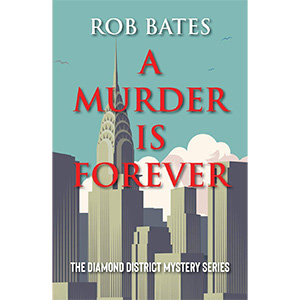 Several novelists and screenwriters have used New York City’s historic Diamond District as a backdrop for their narratives (last year’s Uncut Gems used the district to unravel its sordid tale). But it’s safe to say that none of those writers had the breadth of knowledge of the diamond trade, and the district itself, that journalist and JCK news director Rob Bates has.

Bates has been covering the Diamond District and its players as part of the global diamond trade for close to 30 years—first at Rapaport, then at National Jeweler, and then JCK, where he’s been a reporter for more than two decades and has become a trusted expert and speaker on the subject.

He tapped into those decades of experience covering the district to create the fictional world of his first novel, a mystery entitled A Murder Is Forever, which hits shelves (and all major online sellers including Amazon) on Tuesday.

The novel is the first in a planned series of mysteries (Bates is close to finishing the second installment, and there will be at least three) that fit into the “cozy mystery” genre: a sub-genre of crime fiction that’s low on sex and violence and features a detective who’s an amateur or unexpected sleuth.

In the case of A Murder Is Forever, the protagonist is Mimi Rosen, an unemployed journalist who goes to work for her father’s gem company. There’s friction between Mimi and her father from the get-go, but things really go sideways when her diamond-dealer cousin, Yosef, is murdered, seemingly over a $4 million pink diamond. The already fast-paced narrative absolutely flies from there, as Mimi discovers the gem is pivotal in a scandal involving bribery and murder—and her family.

The novel showcases Bates’ knack for constructing (and at JCK, distilling) gripping narratives that are free from clutter and distraction. Known in the industry and gem journalism circles for his lack of bias and rejection of sensationalism, he says he wanted to show that the Diamond District is filled with normal people doing normal things. But he stresses the backdrop is just a jumping-off point for the novel.

“There’s a crime involved, but it’s not supposed to give a positive or negative impression of the place or the industry,” he says. “It’s not a portrait of the trade. It’s just my impressions of how it is. It’s an industry; it’s people going about their daily lives. Although, it has certain quirks that people outside the industry might not know about.”

He points to Uncut Gems as painting a harsh portrait of the district and its business, “but it’s simply a place that does business and is populated by many different subcultures and lots of passionate people. Like every place, there’s the good and the bad.”

Bates began writing the book close to seven years ago and notes that at that time, everyone in the district knew and talked about a few buildings that were in terrible shape. But several of them have been upgraded since, and Bates says, “I think parts of the story hearken back to that time when I started writing the book. The trade has changed a little since then. Even six or seven years ago, it was a different business.”

His cast of nuanced characters is fictional, though some characters are amalgams of real people. He named two of the main ones after his late mother (Mimi) and grandfather, Max Grajower, who worked as a diamond dealer in the district. But they’re homages, not reflections of their namesakes.

When asked if it was difficult to write a female protagonist, Bates replies, “No, I just treated her like a person,” but adds that he was happy his spouse, Jewelers of America’s director of public affairs and education, Susan Thea Posnock, gave him the thumbs-up on the realism he conjured for the character.

Bates says he hopes his friends, sources, and acquaintances in the Diamond District enjoy the novel for its escapism and insider-y details. But he’s keeping his second career in perspective: “I really enjoyed writing the book, and I hope people like it. But it’s not like I’m quitting my day job.”

Top: The cover of A Murder Is Forever, a new mystery by JCK‘s Rob Bates (photo courtesy of Rob Bates)