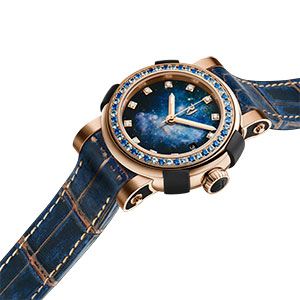 According to LinkedIn, Vulliet is the former director of sales and marketing for North America for LVMH’s Zenith brand, as well as the regional brand director for Brazil, Latin America, and Central America for Hublot.

The appointment was announced by Marco Tedeschi, who was appointed CEO last year and changed the brand’s name soon after.

Vulliet plans to “establish a wholly new retail network in the Americas,” said Tedeschi in a statement. “This region has always been a very important market for our brand. Opening up our own subsidiary in the United States was the logical next step, enabling us to get closer to all market players.”

During the upcoming Baselworld fair this month, RJ will showcase its latest watch novelties, including the Arraw 6919 (pictured), an in-house 360° moon-phase timepiece made with authentic material from the Apollo 11 spacecraft, which first placed men on the moon. RJ will also highlight its first-ever models dedicated to women, the Star Twist collection, as well as a collaboration with DC Comics that references Batman archenemies Two-Face and the Joker.