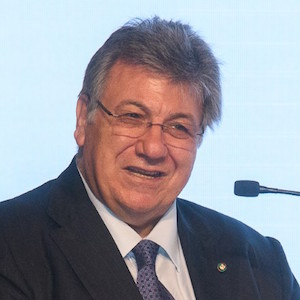 At the end of February, Gaetano Cavalieri (pictured), the generally genial president of CIBJO (World Jewellery Confederation), took a business trip to Dubai, United Arab Emirates, to plan the group’s October Congress. When he returned to his home city of Milan, he knew right away that things had changed. At the airport, someone took his temperature.

After that, he returned to his house. And, for the most part, he’s stayed there ever since.

On Monday, as Italy struggled to contain its growing number of coronavirus cases—its current tally stands at more than 10,000 infected and 600 fatalities—the government took drastic action to slow down the disease in the Red Zone, which includes Milan. All schools and churches were shut. Meetings were banned. Restaurants and bars are allowed open from 6 a.m. to 6 p.m., but only if they allow people to maintain “social distance,” defined as one meter apart. All nonessential travel in and out of the area has been halted.

Cavalieri says that, in many ways, Italy is an ideal place for a disease like this to spread.

“Italy is one of those countries where people shake hands, they hug, they kiss,” he says. “The possibility of infection is very high.”

But it does have certain advantages.

If anyone in Italy has a fever, they are advised to call a certain number, and health authorities come to their house to test them. They keep checking to make sure they are okay.

“We are not treating this as a joke,” he says.

Initially, people were shocked and angered by the restrictions, he says. Many thought them an overreaction.

“But the more they saw that people were dying, they started to understand. We saw what was happening in China, Korea, and Iran. We all have to take responsibility for the public health.”

When I spoke to him Monday, he was characteristically genial, reporting that his new life was very different, but tolerable.

He works from home and hasn’t been to his office since February. Luckily, he has a big house, and while his children and grandchildren live with him—and the children are now also at home—they have their own floors. He has a garden and terrace if he needs fresh air. Schools provide lessons online. He orders groceries via the web and has them delivered. When he goes out, he dons a mask and gloves. Except for his family, he keeps social distance. And needless to say, there’s not much hugging or hand-shaking.

On Sunday, he drove around Milan with his car windows bolted tight. The streets were empty.

“The Plaza del Duomo is usually crowded. It was almost completely empty. You could play football there. I saw maybe 20 to 30 people outside.”

The restrictions are due to stay in place until at least April 3. On Tuesday, the government extended them to the entire country, which has a population of 60 million.

That’s affected Roberto Coin, the jewelry designer (pictured below) based in Vicenza. While the city, home of the VicenzaOro fair, has not seen any coronavirus cases—and wasn’t in the original Red Zone—it is now subject to the same restrictions as the rest of Italy. The rules allow employees to go to work, but not much else.

“Basically, you go to work, the pharmacy, the supermarket, and home, and that’s it,” says Coin.

The designer says his business had already been taking precautions for the last month. Employees check their temperature before they come in. All surfaces are disinfected. Workers wear gloves and don masks when they talk to each other. (“Some used to wear marks before,” Coin says. “But now it’s even the accountants.”) They try to sit one meter apart. They used to eat lunch together. Now they don’t.

Reports of this “new abnormal” sometimes seem like a sci-fi movie. But Cavalieri and Coin don’t doubt the measures are necessary.

“We have no choice,” says Cavalieri. “We must be rational. I don’t want to go out and possibly infect myself or someone else or my family. We have to prevent a situation where the hospitals get too many cases and then the system collapses. The more people behave and comply with the rules, the less time it will take to win over the virus and get back to normal.”

Coin notes that Italy has suffered a huge economic blow from this, particularly the tourism industry, but he feels it will be temporary.

“People will not buy as much for the next two or three months,” he says. “But then we will come back, exporting culture and happiness to the world. And I believe we will be even stronger than before. This has united Italy more than ever.”

He believes that events like this teach valuable lessons.

“This shows us: Not everything is about money. We need to take care of each other. We need more hospitals, more doctors. We need to think about more than just making things cheaper and cheaper.”

He says his message to the world is: “Take this seriously. Put people before business. Business will come back. People don’t come back.”

On Monday, CIBJO sent out a statement in which Cavalieri asked the jewelry industry to embrace its “communal sense of responsibility.”

It was signed with “best wishes from the determined and life-loving city of Milan.”

Afterward, Cavalieri was deluged with well wishes. “The sense of solidarity was very touching.”

He says if anyone reaches out, he’s happy to offer the perspective of someone who’s now in the thick of it.  And he’s heartened by the example of China. After the government took strong action, hard-hit areas came back to life. By Monday, Apple reopened all but four of its Chinese stores.

“It shows that if you do the right things, you can beat the virus,” he says.

Which is why he is optimistic that the industry—and world—will pull together and get through this crisis.

“I am sure that this will be overcome,” he says. “I hope, in a few weeks, this will be history, like a bad dream.”