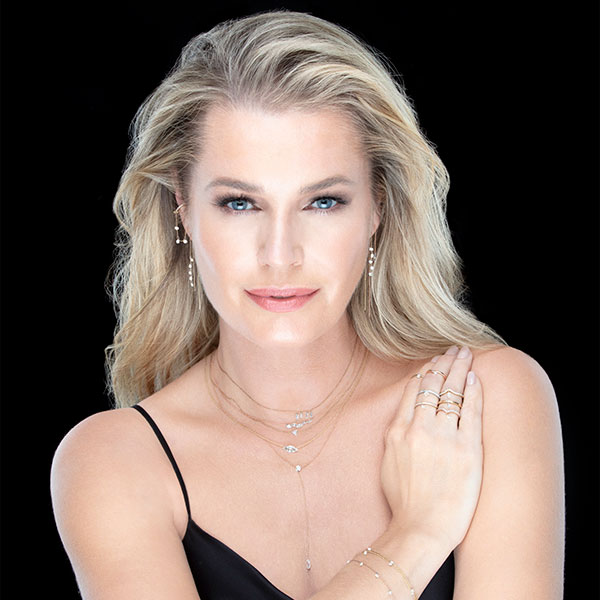 I have to sheepishly admit that my strongest association with the name Rebecca Romijn is the fact that she is married to actor Jerry O’Connell, who starred in Stand by Me, the definitive movie of my tweenhood, which I once watched 10 times in a row with my cousin over an Easter weekend. O’Connell was just a kid then, playing Vern, the bumbling chubster of the group. Later he grew up to be super, super handsome (which yeah, I noticed, especially when I met him for a hot minute at a Seinfeld series finale viewing party around 1998).

Everyone else knows Romijn for her exquisite blond bombshell beauty (which has landed her on a gazillion sexy/beautiful lists over the years), successful modeling career, and work as an actress who landed many a role in the late 1990s and early aughts (several Just Shoot Me episodes, etc.). And she’s definitely best known for her recurring role of Mystique in the popular X-Men film series.

So news of her fine jewelry line, Charlie Dolly, which drops later this week, definitely had my attention. Named for her twin daughters Dolly Rebecca Rose and Charlie Tamara Tulip, the collection is what I expected—very current, very California, very layerable and wear-with-everything. Familiar.

What surprised me is the price point—perfect, perfect, perfect for self-purchasing women or women treating themselves to some diamond action in honor of Galentine’s Day (I’m always here for that). Lots and lots of pieces are under $1,000.

“Living a very free-spirited, bohemian upbringing in Berkeley, Calif., raised by artists and activists, I’d never seen a diamond in person until I started modeling in Paris in 1991, when my love of fine jewelry began,” said Romijn in a statement. “I hadn’t thought much about jewelry settings until I saw loose diamonds for the first time. Then it seemed to me that the only thing that detracted from a perfect diamond was a clunky setting. I began fantasizing about diamonds without settings and wondered if it was even possible. Fast-forward to 2018, I found the manufacturers who were able to execute a delicate gold chain with a perfect solitaire diamond hanging, no setting whatsoever. It was the floating diamond I’ve searched for. As I learned about the technology of laser piercing diamonds, I immediately started sketching designs.”

Everything is made in Los Angeles; a few of my favorite jewels are highlighted below.

Top: Model/actress Rebecca Romijn’s new jewelry line, Charlie Dolly, centers on laser-pierced “floating” diamonds. The pieces are meant to stay on, and not be taken off, no matter what the moment in your life calls for. Romijn hopes customers will add her designs to their existing jewelry rotations and become vehicles for personal expression. You can shop online at charliedolly.com starting Thursday.