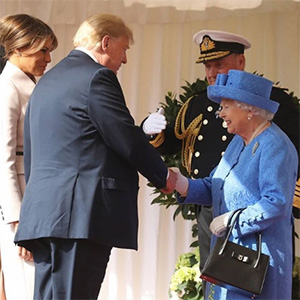 The internet is convinced that Queen Elizabeth subtly communicated her feelings about Donald Trump to the world through the bejeweled brooches she wore during the U.S. president’s visit to London last week.

News outlets and jewelry watchers have been busy parsing the possible meanings of her choices (more on those in a second). And a long and thoroughly entertaining Twitter thread, spearheaded by a writer based in Pennsylvania who goes by the handle SamuraiKnitter, lured many into the would-be imbroglio.

So here’s what happened.

On the first day of Trump’s three-day visit, when she personally met with him, the Queen wore an antique brooch given to her by the Obamas during an official state visit to the U.K. in 2011.

“That by itself is amusing enough,” wrote SamuraiKitty on Twitter. “She wore a brooch the Obamas gave her. But it gets better…She chose THIS ONE. This one was purchased out-of-pocket by Michelle and Barack Obama and given to her as a personal gift. And since the Obamas are really good at this subtle thing, too, they chose a very modest pin made of very modest materials. The message is ‘Here is a gift of something you like, with only sentimental value because it’s for friendship, not state visits…She chose the most sentimental piece in the collection, the one that was given out of friendship with the Obamas as people.”

Then, on the second day of his visit, the Queen (who didn’t actually see Trump that day) wore a brooch presented to her by the governor general of Canada in 2017, called the Sapphire Jubilee Snowflake Brooch. And many who got in on the social hashtags #BroochDecoderRing and #BroochWarfare think her wearing it was a response to Trump’s ill-regarded remarks toward Canadian Prime Minister Justin Trudeau. Many pointed out that it could also be a sly reference to the “liberal snowflake” taunt often lobbed at Democrats by conservative Republicans.

This diamond and sapphire snowflake brooch was presented to The Queen in 2017 by the people of Canada to mark her Sapphire Jubilee. The Canadians presented it as a companion piece to the Maple Leaf Brooch given to the Queen Mother and to celebrate the special relationship between Canada and The Queen. The brooch was made by Hillberg & Berk and is made up of Canadian sapphires, Canadian diamonds, and Canadian white gold. The brooch was presented to The Queen at Canada House in London. It was first publicly worn in July of 2018 during a visit to Windsor Castle by the King and Queen of Belgium, although it is difficult to see due to the pattern of Her Majesty’s dress. If I can find a better picture of the brooch being worn I will update the post.

The Sapphire Jubilee Snowflake Brooch, a present from Canada to the Queen (via @britishroyaljewels)

Finally, on the day Trump kept the Queen waiting 15 minutes for tea, the queen wore a simple diamond brooch that belonged to her mother, who wore it to the state funeral for her husband, King George VI (Queen Elizabeth’s father), in 1952. #Broochgate participants wondered if the Queen wasn’t sending a message of, well, mourning, regarding Trump’s 2016 victory—or was perhaps commenting on the U.S.’s suddenly strained friendship with European nations, at his hand.

Of course, we’ll never know for sure (though it feels like the Obama gift-wearing had to be intentional).

After all, the Queen doesn’t owe anyone an explanation regarding the meaning—or lack thereof—behind her jewelry choices.