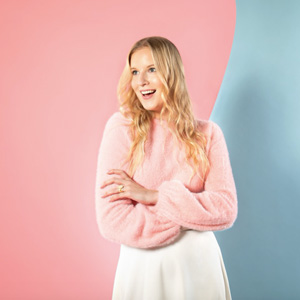 In mid-July, we wrote about Gemist—the fine jewelry platform that lets consumers design their own jewelry then test-drive a prototype of it before buying—securing an undisclosed investment from diamond manufacturer De Beers.

The article sparked some spirited reader comments, primarily in the vein of “this is not new” and “this already exists.” But the reality is, it does not.

To our knowledge, there isn’t another company that offers a click-and-build user experience, paired with a multitude of options to customize any piece, plus the real-world experience of wearing a ring of your design in a silver prototype before you pay a dime to have your real gold model made—the latter being the real differentiator.

We caught up with Fraser to talk about her future plans for the brand (this interview has been edited for space).

JCK: What was your big goal with Gemist when you launched it?

Madeline Fraser: I’m an entrepreneur. It’s all I’ve ever done. When I find a problem, I feel I have to solve it. I experienced a big problem trying to design my own engagement ring. I thought Gemist already existed…I thought I could design a ring, try it on, and then buy it. When I dived into it, I realized the industry was really fragmented. You had mass-produced brands like your Blue Niles, your big jewelry retailers like Kay Jewelers and Jared. Then you had these mom-and-pop people. Then you had Tiffany. I needed something that was easy to execute but also affordable.

I found that no real version of try-on was available. I was super shocked by that. I went around to retail places in Los Angeles, and everything felt expensive and I didn’t leave any stores being like “that was great.”  It was  more, “What do I do now?”

I ended up going downtown to this little shoebox office where I literally drew the ring on a piece of paper and gave the guy cash and left. I was like, “Will I even get a ring?! What’s even happening?” As I started talking to friends about it, everyone understood the pain point.

The ring came out beautifully, and it’s totally me. I love to say that I designed it, and it was affordable by the measure of what I saw everywhere else. I thought, There is a viable product here, we just have to change the process.

And that is what I do—I innovate in industries that need a refresh and a breath of fresh air for a younger demographic. I wanted to build a meaningful transformative experience that allows consumers to easily design jewelry from scratch on a digital platform.

But that only got me halfway there. We’re still a society that likes to touch and feel things. I thought, I need to create an amazing digital platform and give it some semblance of reality. For me that was try-on—the ability to actually wear a design. And that’s the goal. I launched into beta in 2019 hyper-focused on engagement rings. Beta is the time to test, and I’m one of those founders where I’m like I’m at 80% of having this all together, and now the customer is going to tell me what to do.

What did they tell you to do?

The main thing they came back with was—I want the customization for everything. We launched the ability to customize earrings after that. Interchangeable charms are next. And I think the next category will be necklaces. it will be everything from chain links to chain type to stone cut and style, setting type, and stone.

I’m not a jewelry designer, I’m a creative human being who loves challenges. What does the consumer want, need, and love? That’s what we ask ourselves. Then we backtrack from there.

Can you quantify Gemist’s growth since launch?

When the pandemic hit, it was already doing really well. It’s been amazing. We’ve also been growing rapidly from a revenue perspective. We’re at a triple-digit comp increase since launch. Now we’re in growth mode; we’ve moved away from the startup phase.

What makes Gemist different than its competitors online?

We’re definitely the first to do real life, and we’re not just focused on on the engagement ring model. We’re innovating from a tech perspective. I say to investors, we’re a tech company—this isn’t about me having a hobby. This is about disrupting an industry through technology. The other thing we’re doing is demystifying the Four Cs. On other sites, their pitch is that you can design a ring. I would argue you can’t. Guess what happens when you try to choose a diamond? You’re presented with what amounts to an Excel spreadsheet showing all the diamonds available. You would have to be an expert to pick a stone wisely. You need year and years of education.

Try pulling up all the online retailers—I’m telling you, if you delete the scribbly logo in the corner, you can’t tell the difference. I did this myself. I spent hours and weeks trying to do this. I’m a tech person. I’m always going to be innovating through technology. We need to make things easier, simpler, and fun. That has to come from a place of engineering and technology.

Did you start the brand with the idea that it would be venture-backed?

Yes. You need funding to start something. I’m not doing this to have a little tiny company, I’m doing this to disrupt an industry. And you need to surround yourself with smarter people than yourself. I’m not smarter than anyone, I just had the idea and the guts to do it. I’m surrounding myself with the right people to do that. I was on Shark Tank at 22 years old. I’m super persistent. When I believe in something, I go for it 100%.

How did the De Beers connection get made?

I was connected to Stephen Lussier during what was essentially due diligence—you talk to hundreds of people when you’re looking for investors. He and I hit it off. It was boom, off to the races. The worse anyone can say to me is “no,” then I’m right where I started. Stephen said to me, “De Beers is starting a venture fund, and I think Gemist would be perfect for it.”

De Beers is obviously known for natural diamonds, but it also has Lightbox, which produces lab-grown diamonds. Will you use lab-growns for Gemist?

What are the big hurdles Gemist is working to conquer in the near future?

First off, we’re thinking about how to scale. Scaling a company: What does it look like nationally and internationally? I would say the other thing I’m thinking about is what does the future of retail actually look like? I’m a believer in digital-meets-reality, so I built a really experiential retail model to run alongside the digital platform.

So, are you planning for brick-and-mortar retailing?

Yes. There’s brick-and-mortar to come. It will be kind of taking the digital platform and putting it into a physical space. It’s going to be a Build-a-Bear model, and colorful, experiential, and bold.