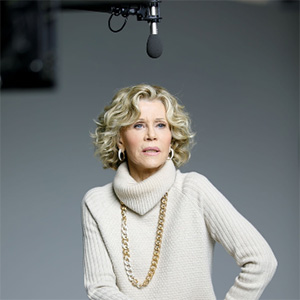 This is the second annual International Women’s Day campaign for the luxury jewelry brand and marks the return of Fonda to the ongoing project.

At the heart of the campaign is a lovely three-minute video that spotlights the importance of inclusiveness in our professional and private lives. Fonda and friends take turns delivering statements about the importance of inclusiveness and unity: “Until all of us are included, we are all excluded”; “Community teaches you to think not only about yourself”; “My biggest responsibility is to empower other women”; and “Every woman…shares a sisterhood with each other.”

As was the case in the first #PomellatoForWomen campaign, the notables featured in the video represent a variety of ages and nationalities. Woven together artfully, their sentiments and wishes regarding gender, unity, and inclusiveness create a thoughtful and moving ode to women.

The black-and-white video, directed by Igor Ramírez García-Peralta, ends with a couple of brand callouts, including brand ambassador Ferragni stating, “Pomellato—caring for women since 1967.” (The campaign’s proprietary hashtag is #PomellatoForWomen.)

Here’s the video in its entirety:

Pomellato, which is part of Kering, was founded in 1967 with the self-purchasing woman in mind—and 75 percent of the Milanese jeweler’s workforce is female. The brand launched the #PomellatoForWomen campaign in 2017, on Pomellato’s 50th anniversary.

Top: Jane Fonda during the filming of Pomellato’s digital campaign for its International Women’s Day initiative (video and photo courtesy of Pomellato)