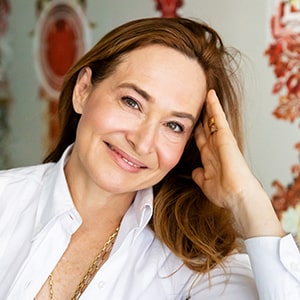 In This Episode
In this edition of The Jewelry District, JCK editor-in-chief Victoria Gomelsky and news director Rob Bates interview Marla Aaron, jewelry designer and founder of her eponymous brand. They’ll be discussing Marla’s rise as a self-taught newcomer in the jewelry industry and how she built her online presence and jewelry business from the ground up.

Show Notes
00:30 Rob and Victoria introduce New York City–based jewelry designer Marla Aaron.
06:27 Victoria asks Marla how her background has affected her launch into the world of jewelry.
11:43 Marla describes some of the more unconventional things her business has done.
15:06 They discuss Instagram and Zoom as tools Marla uses in her business.
17:23 Marla discusses her Lock Your Mom project.
19:16 Victoria asks about Marla Aaron’s new jewelry collection.

Introducing Marla Aaron
Victoria and Rob kick off by introducing guest Marla Aaron. She’s a jewelry designer based in NYC and known for her for her “emotional hardware”—her lock jewelry, which has been around since 2012. She had a 20-plus year career in marketing and advertising, but she’s always been obsessed with jewelry and hardware. She worked on creating jewelry for several years while holding onto her full-time job before leaping headfirst into the jewelry industry. She also recounts her fascination with hardware, which started in her youth, and historically traces back to the Victorian and Georgian eras.

Marketing and Advertising
Victoria asks if Marla’s background in marketing has at all affected her line of work, but Marla explains how much she is driven by her own passion, so much so that she says she has thrown out many things she believed to be an absolute truth in order to pursue her dream of designing jewelry. Marla explains how as a relatively new designer she put herself on the map. There were certainly some bumps in the road, but, luckily, Instagram was starting to take root at the same time, which helped her boost her company.

Unconventional Business Practice
Marla Aaron is in about 40 stores around the world and has its own showroom in NYC. It’s also opening a new showroom on 47th Street in the next few months. The company doesn’t do consignment, as it would limit Marla in what she could do. Marla describes some of the more unconventional things that her business does that makes it stand out. One of the most unconventional is its fine jewelry vending machine, and you’ll hear her describe this installation at the Brooklyn Museum.

Self-Taught, Self-Built Online Presence
You’ll hear Marla explain her company’s online presence and talk about the second Instagram account that her customer experience staff runs. She also explains how she Zooms with her customers using two employees—one at the ready to show off the jewelry and one to answer questions. Her Instagram has 95,000 followers, and Rob asks what she thinks of influencers and if she believes jewelry owners are becoming their own sort of influencer.

Lock Your Mom Project
Victoria asks how the pandemic has been for her, and Marla explains how on March 11 she sent all of her staff home and since then has implemented daily 9 a.m. and 5 p.m. Zoom calls to keep up. You’ll also hear Marla explain her Lock Your Mom project, where every year her company gives jewelry to single moms who might be feeling bittersweet on Mother’s Day. The sterling silver heart lock has an explanation point for the exclamation of motherhood.

New Jewelry To Look Out For
Rob asks what has been driving Marla Aaron jewelry to flourish during this time, and Victoria asks Marla about her new fall collection. Marla explains how excited she is for the September 15 release of the collection. An enormous departure from what it normally does, the pieces have a new lock function that she has been working on for three years and other pieces that are outside her wheelhouse. Rob asks Marla as a newcomer what she thinks needs to be changed in the business, and Marla explains that she thinks accessibility is a problem.