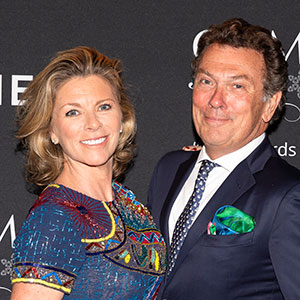 In this Episode
In this edition of “The Jewelry District,” you’ll hear JCK editor-in-chief Victoria Gomelsky and news director Rob Bates interview a couple for the first time. Hayley Henning, who is an expert in colored gems and is also vice president of sales and marketing at Greenland Ruby, and husband Erik Jens, an expert in diamond industry financing and a strategic partner for companies in the luxury industry, talk about their respective companies, climate change, and JCK Tucson.

00:31 Rob and Victoria introduce Hayley Henning and Erik Jens
11:20 Henning discusses Greenland Ruby
15:04 Jens compares the colored gem industry to the diamond industry
17:38 Rob and Victoria ask Henning about Greenland and climate change
24:56 All things JCK Tucson
26:23 Rob asks Jens about his background at ABN AMRO
31:13 Rob asks Jens what he sees as the biggest problems in the industry

Introducing the Power Duo
Rob and Victoria introduce their guests Hayley Henning and Erik Jens, a couple in the jewelry industry who have been married for three years. You’ll hear the story of how they met at a conference in Moscow and became industry friends, which soon turned to more. Since they met at a conference, they also discuss conferences in general. They question whether conferences really add value and make a difference at all in the face of things such as sustainability.

Colored Gemstones Are a Diamond’s Best Friend
Henning talks about her experience in the colored stone world. You’ll hear all about Greenland Ruby, where she is the vice president of sales and marketing. She’s fascinated by the originality of the location of gemstones and the process by which these stones go from Greenland to the market. She makes sure to not leave her diamond-industry expert husband out of the mix, as she notes how colored gemstones really are a diamond’s best friend. Jens expands on this.

Climate Change and Greenland, the Untapped Resource
Rob asks Henning about the independent and autonomous country of Greenland. What Henning finds so interesting about Greenland is the fact that it sits atop one of the world’s biggest and richest mineral deposits. It’s an untapped resource that has been under ice and snow for millions, if not billions, of years. Rob also asks about climate change and what that means for the Arctic region.

Erik Jens: Finance Extraordinaire
Jens talks about his background in, and passion for, the world of finance. Jens has experience in banking, so it made sense for him to take over the diamond division at ABN AMRO. Since the financial crisis, he’s been all over the world in the restructured hedge fund, private banking, and diamond sectors. Hear Jens discuss how he worked to make the ABN AMRO portfolio healthier during his time there.

Problems and the Need to Improve
Rob asks Jens what the biggest problem in the industry is (spoiler: Jens doesn’t think it’s an issue with finance—it’s actually profitability). Listen to what the profitability issue entails, as well as Jens’ take on the mined- versus-lab-grown-diamond front when it comes to marketing practices. You’ll also hear what Henning and Jens think it will take for the industry to improve.