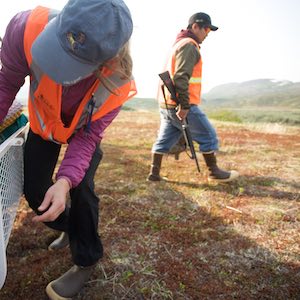 Tom Collier, longtime CEO of Pebble Partnership, which hopes to build a gold and copper mine in Bristol Bay, Alaska, resigned after secretly recorded tapes revealed him bragging about his influence with local and national politicians.

The Environmental Investigation Agency, an activist group, recorded a Zoom conversation with Collier and other project leaders while posing as potential investors. The tapes can be seen here.

The mine has had been criticized by several jewelers, especially Tiffany & Co., which once hosted the screening of an anti-Pebble film. Opponents have argued the mine will hurt the region’s salmon fisheries.

On the recordings, Northern Dynasty CEO Ronald Thiessen predicted that the mine will grow in the future­—contradicting past assertions that it will stay small.

“This is a well-worn path that we’re following to build something that allows us to show the community and the state that we can do it, we can do it well, that it’s not dangerous, and then we’ll come in at some point in the future and request [an expansion],” he said.

Collier, who served as U.S. Department of the Interior chief of staff during the Clinton administration, boasted of his political influence, noting he is a registered independent who has worked to get Republicans elected in the state.

“Practically there’s no risk that the Trump EPA is going to veto [the project]. There’s just no risk.”

He noted he had regular access to Trump administration officials. “We can talk to the chief of staff of the White House anytime we want,” he said.

Still, a few of Collier’s comments many anger some people in Trump’s orbit.

“Those of us who have that kind of experience in government are just flabbergasted, frankly, at the way this administration works. The left hand often doesn’t know what the right hand’s doing.”

He also boasted of his relationship with Alaska governor Mike Dunleavy.

He believed that the state will eventually approve the mine, given its current fiscal condition.

“Alaska is one of the very few states in America that does not have an income tax. So, the only way the government really raises money is off of the tax it imposes on the oil and gas industry per barrel of oil, essentially. And you know what’s happened to the price of oil in the last year or so.

“So, we have deficits up here of billions of dollars,” he continued. “[W]e’re looking at a potential bankruptcy of the state in just another couple of years here. And the only way to fill that gap, the state now believes, is essentially through mining revenue. And we’re the biggest game in town with respect to that.”

While the state’s two senators—Lisa Murkowski and Dan Sullivan—publicly oppose Pebble, Collier said he believes that they won’t do anything to block the project.

Murkowski is “very political,” he said. “When she’s asked a question, she says things that don’t sound supportive of Pebble. But when it comes time to vote, when it comes time to do something, she never does anything to hurt Pebble…. She had some opportunities to kill this project if she wanted to, and she didn’t do it.”

After the tapes’ release, Murkowski and Sullivan reiterated their opposition to the project on Twitter.

A Pebble Partnership statement said: “Collier’s comments embellished both his and the Pebble Partnership’s relationships with elected officials and federal representatives in Alaska, including Governor Dunleavy, Senators Murkowski and Sullivan and senior representatives of the U.S. Army Corps of Engineers. The comments were clearly offensive to these and other political, business, and community leaders in the state, and for this, Northern Dynasty unreservedly apologizes to all Alaskans.”

In the statement, Thiessen criticized the “unethical manner” in which the tapes were made but said they don’t excuse the comments.

Former Pebble Partnership CEO John Shively has been named as interim CEO, while a replacement is being sought.