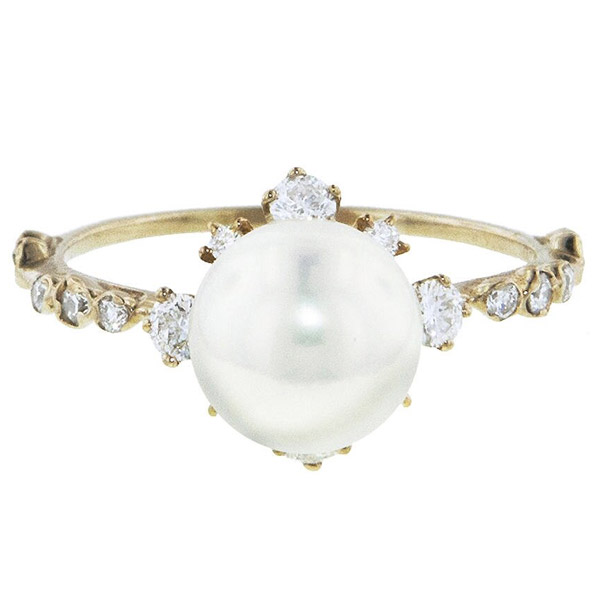 I’m not one to get excited about celebrity engagements. Some last, most don’t, whatever. But anyone interested in jewelry would be powerless to resist a peek at some of the stars’ engagement rings—such a wide range of styles that many of us can only dream of owning.

The recent engagement of one Ariana Grande (perhaps you’ve heard of her?) might not be big news to those who don’t listen to her music, but her ring is. Whether or not this union lasts, I think the trend it spurs will, perhaps even more than J.Lo’s pink diamond from Ben Affleck in the early 2000s.

You can see a shot of Grande’s ring on her Instagram account here—it’s a slightly offset oval-shape diamond cozied up to a gleaming pearl. It’s the way the oval is situated, for one, that makes this piece stand out, but perhaps even more notable is the pearl (there is speculation, though so far no confirmation, that it’s a sentimental gem from Grande’s grandparents).

Ariana Grande is not the first celebrity to get engaged with a pearl ring. Emma Stone, Michelle Williams, and food writer Alicia Kennedy have all done so as well. But in terms of setting a trend, Grande’s is packed with so much firepower because of her fan base and their budding ages, so don’t be surprised when brides-to-be start requesting pearls—and what’s more, probably custom pieces featuring pearls.

It’s been a really big year for pearls, with the gem extending its influence well beyond the traditional necklace or pair of earrings, popping up on Hollywood’s leading men and, now, on the finger of a pop star bride-to-be. If 2020 was the year pearl made a splash, 2021 will be the year it makes a tidal wave. (See also: Amy Elliott’s feature from the October 2020 issue of JCK, Are Pearl Engagement Rings Really a Thing?).

There are those skeptical of committing to a pearl for such an enduring piece as an engagement ring, and that too makes sense. Pearls are delicate, and may not be cut out to endure the wear and tear that more traditional choices like diamonds or sapphires do. That certainly doesn’t mean that clients should be discouraged from choosing pearls, only that they should be advised on the appropriate care of such a ring.

Beyond the inclusion of a pearl on an engagement ring styled similarly to Grande’s is its layout. Any gemstones could stand in for the diamond and pearl, for it’s the notable setting, slightly askew, that stands out. Some call the positioning a cluster, even with only two stones, but I see it more as a cuddle. Either way, pearl or no pearl, expect similar styles to dominate the wedding jewelry market as we head into the new year.