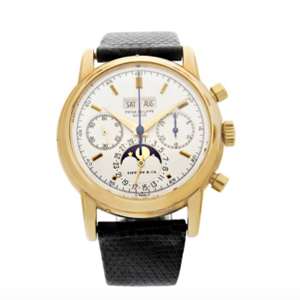 The sought-after Patek Philippe reference 2499 watch was originally retailed by Tiffany & Co. and sold for $818,600 (its sales estimate was $500,000–$800,000). It was the first time the watch appeared on the auction block. The timepiece was produced in 1981 and features a personal inscription, “Patek Philippe,” on its folding clasp.

Another rare watch, an Audemars Piguet Royal Oak Grand Complication with a salmon dial, was also on auction for the first time, and fetched an impressive $441,000. Meanwhile, a unique vintage clock, a Charles Frodsham & Co. Ltd. open-faced minute repeating split-second chronograph originally owned by J.P. Morgan Jr. (and on offer through the estate of Alexandra McCain Morgan) went for $201,600.

The auction lured nearly 400 bidders online and over the phone. And two lots—a Patek reference 3800/1 wristwatch and a Rolex “Hulk” Submariner reference 116610LV (it’s green!)—enticed 48 and 40 distinct bidders, respectively. Twenty-seven percent of the auction’s final buyers were new to Sotheby’s, and 36.2% of bidders were under the age of 40, facts that exemplify the ongoing popularity of pre-owned luxury watches among younger buyers.

Even with the COVID-19 pandemic, 2020 has been a banner year sales-wise for auction houses Sotheby’s, Christie’s, Phillips, and others, as affluent buyers who’ve been restricted from travel have diverted those experiential funds to tangible luxuries such as jewelry and watches.

In Sotheby’s watch sale, 83% of bidders participated online, and 61% of all sold lots were bought virtually.