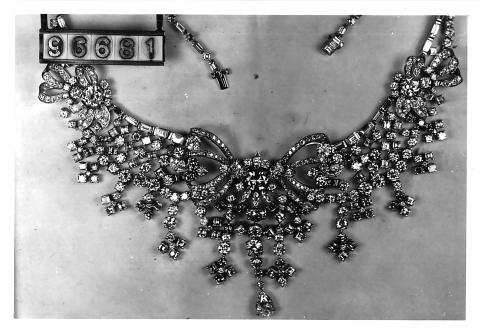 Oscar Heyman is a thriving heritage brand that has set out not to reinvent itself, but rather to attract new audiences simply by continuing to leverage what has always defined it: jaw-dropping gemstones, compelling design stories, and best-in-class workmanship.

Founded in 1912, the company is further distinguished by its rich history of innovative gem-setting techniques as well as a dossier of important commissioned work for the world’s most prestigious jewelry houses. And those who have had the opportunity to tour the brand’s New York City showroom and workshop know that the space is home to a meticulously maintained archive of hand-drawn, hand-painted jewelry renderings. Each is a tiny relic, a precious work of art that helps connect the diamond- and sapphire-studded dots of Oscar Heyman’s illustrious past, while occasionally serving as inspiration for new designs.

The below diamond necklace dates from 1955 and offers a sneak peek at some of the treasures hiding in Oscar Heyman’s colossal design archive. Along with other historic designs, it will appear in a new book being published in April titled Oscar Heyman: The Jewelers’ Jeweler (MFA Publications, Museum of Fine Arts, Boston). 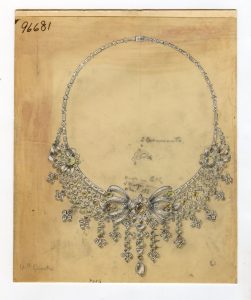 Created by designer Henry Rodgers, an Oscar Heyman employee from the 1920s through the early 1960s, the necklace was made for the iconic Hollywood jewelry store Laykin et Cie to be worn by Lana Turner in the 1959 film Imitation of Life. The necklace features baguette, square, round, half-moon, and marquise diamonds as well as round yellow and brown diamonds, all set in platinum, and a flash of the dramatic piece can be seen in the movie’s official trailer.

The photo at the top of this post is a record of the completed necklace right before it left the workshop.