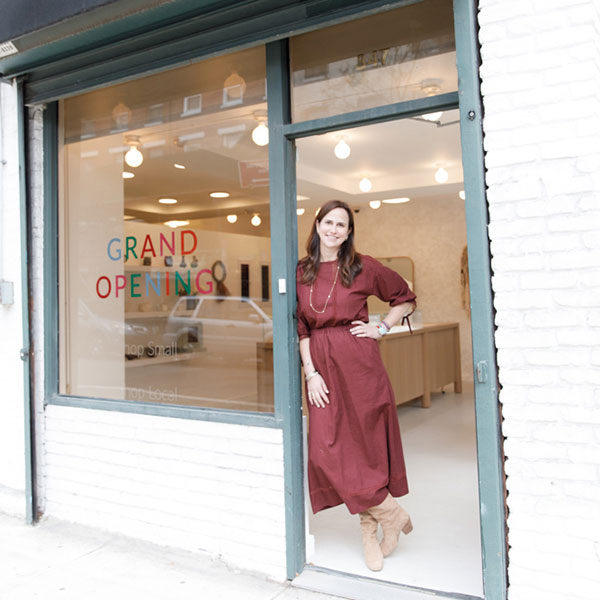 Independent fine jewelry designer Page Sargisson had been eyeing a sweet little storefront at the corner of Atlantic Avenue and Hoyt Street in Brooklyn earlier this year as a spot to potentially stage a pop-up shop.

This was right before the pandemic hit, when brick-and-mortar retailing in New York was humming along beautifully. But even after COVID-19 closed the city’s stores for several months, Sargisson was still interested in setting up shop in the light-filled storefront, a former Steven Alan boutique that had been sitting empty.

Eventually, she was able to negotiate a cut rate for rent (more on that in a minute), and Sargisson went from planning a pop-up shop to signing a two-year lease for the space at 347 Atlantic Avenue to opening her first-ever retail store, which bowed in late November.

Sargisson tells JCK that over the last few years, she’s enjoyed an increase in one-on-one appointments with clients in her studio; she realized “that was only by word of mouth, and that maybe if I opened a retail store, I’d have even more of that.”

The 1,000-square-foot store is half showroom, half workspace. Sargisson had a partial wall erected to separate the two spaces, but people walking along Hoyt Street can see her and her team working at the bench—and occasionally catch a glimpse of Junebug, Sargisson’s new “pandemic puppy.” She jokes, “It’s like getting to peek into Santa’s workshop.”

She notes that she’s always loved the city block her store now sits on, and says she’s excited to be part of a retail row that features several female-owned indie shops, including one home to Michele Varian, who recently relocated from Manhattan. “I didn’t realize that I was missing a community before, but now that I’m part of this one, I realize how great it is to have other small businesses around to support one another.”

Known in jewelry and design circles for gold-and-gemstone designs that intentionally feature marks of the human hand (fingerprints, tool scrapes, and other bench-born accents), Sargisson’s been at the forefront of a design movement that celebrates a more casual approach to fine jewelry design and fabrication, along with designers Polly Wales and Emilie Shapiro.

Her decision to open a real-deal store was also influenced in part by a decline in her wholesale business due to national store closures. “Sadly, retail is hurting right now,” she says, “so I’ve seen my wholesale really go down these last few years. But people do want to support small businesses, and I hold a ridiculous amount of inventory at all times for my trade shows and wholesale accounts. Why have it hidden away in a safe when I can have it out and customers can see it? And [in a store] they can talk to me and my team.”

Sargisson explains that she appealed to the building’s landlord with the message, “I know I can survive and pay X amount in this climate—can we reach an agreement for two years and then renegotiate?” Ultimately, they split the difference. “I felt OK about building out a space in the midst of a pandemic,” she says, “and [the landlord] gets a reliable tenant paying each month.”

The store was designed and built out by Caroline Brown of HB Design and creative consultant Teresa Delorme, and is open Tuesday–Sunday. But because of COVID-19 restrictions, only two customers are allowed in at a time, and Sargisson recommends that shoppers book an appointment on the brand’s website before visiting. But she stresses that stopping by is great, too!