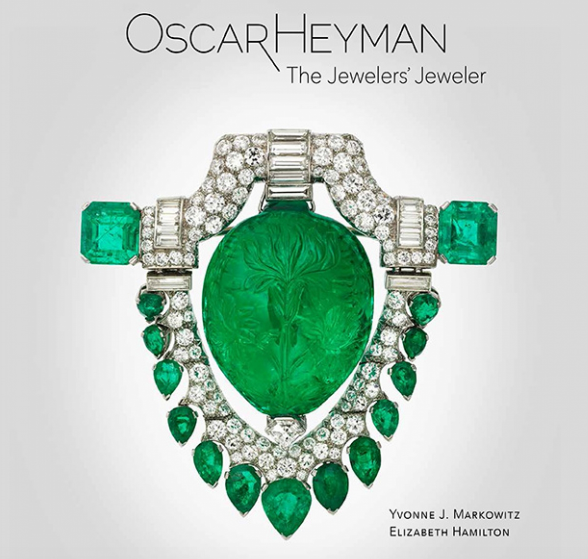 The work and influence of Oscar Heyman & Brothers, one of the most historically significant American jewelry firms, is the subject of a new book published by the Museum of Fine Arts, Boston (MFA).

Oscar Heyman: The Jewelers’ Jeweler—which will be available for purchase April 1 at the MFA, in retail bookstores, and online—is the first illustrated history of the seminal jewelry brand, which launched in 1912 and made exquisite jewelry under its own shingle as well as for high-profile clients, including Cartier; Tiffany & Co.; Harry Winston; Van Cleef & Arpels; Shreve, Crump & Low; and Black, Starr & Frost.

The new tome features detailed photographs (with commentary) of vintage and contemporary pieces, as well as beautiful design drawings from the Oscar Heyman Archive. It also traces the story of the company, including major milestones such as the firm’s participation in two New York World’s Fairs.

Nearly 70 pieces of jewelry are highlighted, including a 1929 platinum, diamond, and emerald brooch worn by the heiress and art collector Marjorie Merriweather Post; and a platinum and diamond pendant featuring flanking cornucopias and a large round diamond, retailed in the 1920s by Raymond Yard and now in the Neil Lane Collection.

Pendant, circa 1929, from Oscar Heyman, retailed by Raymond Yard and now in the Neil Lane Collection

The book, which was written by Yvonne J. Markowitz, a curator emerita of jewelry at the MFA, and writer-researcher Elizabeth Hamilton, also includes 15 design drawings from the firm’s archives, including designs for patriotic World War II ornaments (featuring the American eagle) and a bold diamond and emerald necklace made in 1956 and gifted decades later to Elizabeth Taylor by singer Michael Jackson.