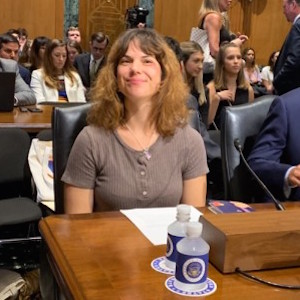 Paula Barnett, a Brownsville, Ore., jewelry designer who has sold her handmade engagement rings on crafts marketplace Etsy for the past six years, admits it was “weird” that she ended up testifying before the United States Senate. But when an Etsy public affairs person called and asked her to do it, she figured, “Why the hell not?”

And so, on July 30, Barnett testified in front of the Senate Finance Committee, which is currently reviewing the United States–Mexico–Canada Agreement (USMCA), the recently negotiated revamp of the North American Free Trade Agreement (NAFTA).

She was prepped for her testimony by both Etsy and Sen. Ron Wyden (D-Ore.), the ranking member on the Senate Finance Committee.

“Wyden wanted someone who was a small business to testify,” she says. “Most of the other witnesses were from the agribusiness, automotive industries. I was the only woman on the panel, the only small business owner.”

Her company, Paula Elaine Barnett Jewelry, sometimes ships to Canada, and in her testimony, Barnett spoke in favor of the USMCA’s revamp of the import rules into Canada, which has been endorsed by Etsy.

“That means that if you sell something to someone in Canada for under 40 Canadian dollars, you don’t have to pay taxes on it,” she says.

In her testimony, Barnett said that, currently, “many of my customers must pay extra taxes and fees on the pieces I export, often unexpectedly. I have had many packages get stuck in customs, and to the dismay of my customers, they must travel in person to pay the required fees before collecting their item. In some cases, the cost can nearly double the price of the item.”

This has led to orders being canceled, and she has to either refund the purchase plus fees or incur the bane of any e-seller’s existence—negative reviews, she said.

She added that the current U.S. $800 de minimis thresholds are also important to her, as she sometimes imports opals from Mexico. Wyden and Finance Committee chairman Charles Grassley (R-Iowa) have suggested that a footnote in the new USMCA could cause those thresholds to be lowered.

Barnett said that would impede her business.

“Some of these stones are of a high value, but do not reach the $800 U.S. de minimis threshold that Congress established in 2015,” she testified. “Given the importance of de minimis customs thresholds to my business, I’m hopeful that Congress will ensure the final agreement establishes certainty, not uncertainty, around this important issue.”

The scene in the Senate was mostly as she imagined, Barnett says, though she was a little surprised that she ended up testifying first. Her hearing was not as crowded as, say, Robert Mueller’s, but it did attract some press (she made C-SPAN), though senators zipped in and out of the hearing for votes throughout.

She found testifying “pretty nerve-racking. I haven’t given a presentation or spoken in front of people in a really long time. I didn’t feel nervous, but I was shaking.”

She ended up sitting at the witness table with her fellow speakers for two and a half hours, though she fielded only a few questions. Barnett did meet Wyden, whom she calls a “great guy,” and got a tour of Congress.

“I’m glad I was able to represent the little guy,” she says, though she can’t really judge how she did.

“Everyone said I did a good job. I’m just going to take their word.”

In 2011, a Maryland  jeweler testified before Congress, urging repeal of an Internal Revenue Service reporting requirement. It was eventually repealed.