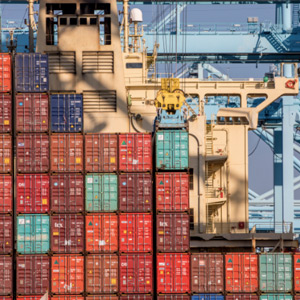 Online shopping grew approximately 49% year over year during the 2020 holiday season, which has increased the volume of imports at at least one major American port to the point of strain.

In a recent appearance on CNBC’s Power Lunch, Port of Los Angeles executive director Gene Seroka said cargo volume was up 50% in the second half of 2020 compared to the first half—and that it’s become common for loaded ships to have to wait, anchored at sea, until a dock opens up for unloading.

“The port is strained,” he said. “We’re shipping back two times the amount of empty boxes than we are American exports across our docks.”

Seroka said the increased volume is all due to “the change in the American consumer,” explaining that during the pandemic, “we’re not buying services, we’re buying goods.”

Logistics industry news outlet The Loadstar reported Nov. 20 that a “wave of Asian imports” was overwhelming the Los Angeles and Long Beach, Calif., ports. And this was before the peak of holiday shopping.

The Port of Los Angeles is the busiest container port in North America, intaking 17% of all U.S. cargo. While imports from Asia are breaking volume records, U.S. exports at the port have declined in 23 of the last 25 months, according to CNBC, in part due to White House–designed changes in U.S.–China trade policy.

Other West Coast ports saw volume increases, but none as dramatic as L.A.’s: The ports of Seattle and Tacoma, Wash., experienced a 4.7% increase year over year in import containers in October, while the Port of Oakland, in California, reported a 10.4% year-over-year rise in imports in October—though that volume slowed to a 0.9% year-over-year rise in November, which an official said was due to delays and congestion in Southern California’s ports.

On the East Coast, the Port of New York and New Jersey (which is one port complex) saw cargo volumes spike 20.2% year over year in September, and 13.8% in October compared to October 2019.

What does all this mean for retailers and consumers? Product deliveries have been (and likely will be) delayed more often. According to Seroka, container dwell time on Port of Los Angeles terminals doubled during the holiday season.

And prices on goods will go up as supply chain costs rise. In October, commercial rail company Union Pacific raised its surcharge on small shippers’ cargo that topped their contracted volumes out of Seattle to $1,000. Costs such as these trickle down to the retailer, then the consumer.