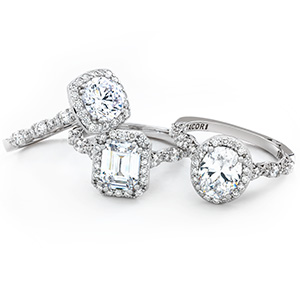 One in three respondents think engagement rings should cost less than $1,000, according to a new survey by conducted by Google Surveys on behalf of website CreditDonkey.com.

In addition, three out of five women don’t expect a ring of more than $3,000—though millennials, a group often considered frugal, have higher cost expectations than other groups. Only 28.5 percent of women aged 25 to 34 think an engagement ring should cost less than $1,000, compared to 41 percent of those 35 to 44.

– Almost half the respondents—45 percent—said they wouldn’t mind receiving a lab-grown diamond: 43 percent of men and 47 percent of women.

– In addition, 40 percent of respondents said that even a totally fake ring was acceptable—with slightly more women (44 percent) saying yes to the idea than men (35 percent).

– More women than men believe a diamond ring is a good investment (61 percent to 43 percent).

– Almost half of women (45 percent) said an engagement ring is not necessary, compared to 41 percent of men.

– When asked if they would rather spend more money on the engagement ring or honeymoon, almost three in four respondents answered, “honeymoon.”

– People still want surprise proposals. About two-thirds of respondents (66 percent men and 69 percent women) think it should be a surprise. Younger people are more likely to want a surprise—the idea was favored by 76.5 percent of millennials, versus 52.2 percent of those aged 55 to 64.

The full CreditDonkey survey can be seen here.