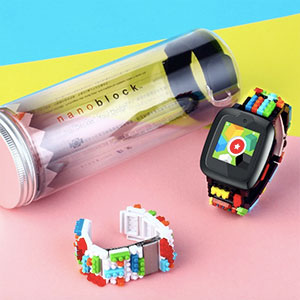 Wearable device developer Omate has introduced an effective—and super cute!—way for parents to keep up with their kids when they’re not with them.

The Omate x Nanoblock is a GPS watch made expressly for young kids who aren’t ready for a mobile phone. And thanks to a watch band made by Japanese toy manufacturer Diablock, it resembles an armful of Legos when strapped on.

But for parents, the device’s cuteness is secondary to its utility. The Omate x Nanoblock has location tracking, security features such as SOS alerts, two-way voice and video chatting, a three-day battery life, an alarm, a pedometer, a stopwatch, and a front-facing camera.

The watch, which goes on sale on Amazon and Omate’s website in June, triangulates a kid’s whereabouts through a combination of GPS, Wi-Fi hotspots, and cellular networks via its built-in SIM card.

And none of the data from the device can be compromised, says Omate, because it’s transmitted through an end-to-end encrypted virtual private network, via 3G connectivity, built by Tata Communications.

Laurent Le Pen, founder and CEO of Omate, said in a statement: “What sets the Omate x Nanoblock apart from other children’s smartwatches is the extra security layer provided by the global private network of Tata Communications MOVE-IoT Connect. It means that parents can keep track of and in touch with their kids in real time, but no data on the network can be intercepted by unscrupulous individuals.”

GPS-security watches are, unfortunately, a timely piece of technology for families in the U.S., as parents grapple with the growing number of school shootings (there have been 18 this year alone). For many parents, the impetus to track our kids no longer feels like over-the-top helicopter parenting.

That aside, watches like Omate’s also, in theory at least, encourage kids to walk, run, and move more—so they can rack up those impressive step counts.