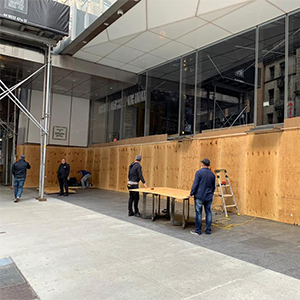 Following JCK’s special report yesterday on the nationwide looting of jewelry stores—particularly those in Minneapolis and Chicago—similar incidents of violence, vandalism, and theft continue to occur around the country.

After days of ongoing protests demanding justice for George Floyd, the 46-year-old Minneapolis man who was killed in police custody on Memorial Day, New York City’s SoHo neighborhood was hit especially hard: Bloomingdale’s and independently owned AUrate New York and Broken English were among the retailers who sustained damage, inventory loss, or both.

Ahead of these events, members of the Jewelers Helping Jewelers Facebook group posted several videos of 47th Street storefronts and buildings preparing for unrest throughout Monday morning and afternoon. Most of the storefronts on the block appeared to be boarded and heavily guarded.

Additionally, since yesterday’s report, JCK has learned of looting and damage at the Providence Place Mall in Providence, R.I.; in Santa Monica, Calif., where the King Baby studio and corporate office was looted; and in St. Louis, where a retired police captain was shot and killed in front of a pawn shop.

If you discover your store has been robbed or damaged, John Kennedy, president of Jewelers’ Security Alliance, urges jewelers not to rush to the scene. The organization. posted this bulletin outlining jewelry store protection guidelines.

“A jeweler shouldn’t respond to the store until the situation has calmed down, otherwise he or she puts themselves at risk,” Kennedy says. “If you know there is damage, the first thing may be to call your insurance agent. The next thing to do may be to get police or a guard service to accompany you when you respond to the scene. The next thing is to hire a security guard to secure your store. Finally, you must call the tradespeople you need to repair glass and construction, restore locks, and clean up.”

Beginning tonight in New York City, an extended curfew from 8 p.m. to 5 a.m. will be in effect through Sunday.

Editor’s Note: This story has been modified since its publication.