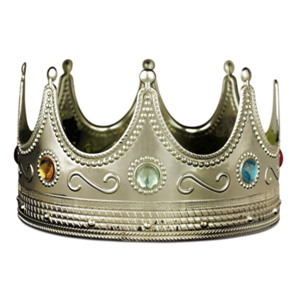 Sotheby’s sale Tuesday celebrating the history and cultural impact of hip-hop culminated in the sale of a plastic crown once worn by late hip-hop star Notorious B.I.G. The plastic crown sold for a jaw-dropping $594,750, making it the auction’s top-selling lot.

The rapper signed the crown, which is decorated with plastic colored gemstones, just days before he was murdered in 1997. Its hammer price roughly doubled its high sale estimate of $200,000–$300,000.

Photographer Barron Claiborne, who’d styled “Biggie” in the crown for a photo shoot that ran in Rap Pages magazine, put the piece up for sale and also signed the crown with a note inside it reading, “Crown from Biggie KONY Shot NYC 3-6-97.”

Sean “Diddy” Combs, owner of the rapper’s label, Bad Boy Records, was also at the 1997 photo shoot, and Sotheby’s reports that Combs at the time worried the crown would make the rapper look like “the Burger King.” Claiborne brought two crowns of different sizes to the shoot, and one was too small to be used. The other—the crown he wore—had to be altered to fit Biggie: Claiborne removed its interior foam cushioning.

But on Biggie, the cheapie accessory didn’t read comedic in the least. Juxtaposed with the rapper’s soulful eyes and somber expression, it made him look like an embattled, world-weary king. The photo Claiborne captured went on to become one of the most celebrated images in hip-hop history.

The Sotheby’s Hip Hop sale was the first ever dedicated to the music and cultural genre’s memorabilia by a major auction house. The auction showcased artifacts, contemporary art, photography, vintage and modern fashion, historic and newly designed jewelry and luxury items, rare ephemera including flyers and posters, important publications, and more spanning from the 1970s, the decade hip-hop was born, through present day.

Other high-profile lots in the sale included rapper Slick Rick’s diamond eye patches, which sold for $30,240 and $25,200, respectively; a collection of letters written by Tupac Shakur to a fellow student at the Baltimore School for the Arts when he was a teenager (sold for $75,600); and Salt-N-Pepa’s famous “Push It” leather jackets, which sold for nearly $24,000.

The auction was organized in collaboration with Monica Lynch, who worked at Tommy Boy Records from 1981 to 1998 (becoming president in 1993) and helped launch the careers of Afrika Bambaataa & Soulsonic Force, Queen Latifah, De La Soul, and Naughty by Nature, among others.

A portion of proceeds from the sale benefited the Queens Public Library Foundation, to support its Hip Hop Programs and Culture, coordinated by “Uncle” Ralph McDaniels, as well as Building Beats, a nonprofit community organization that teaches tech, entrepreneurial, and leadership skills to underserved youth through DJ and music programs.

Top: Sotheby’s auctioned the crown that Biggie wore for just under $600,000 (image courtesy of Sotheby’s).