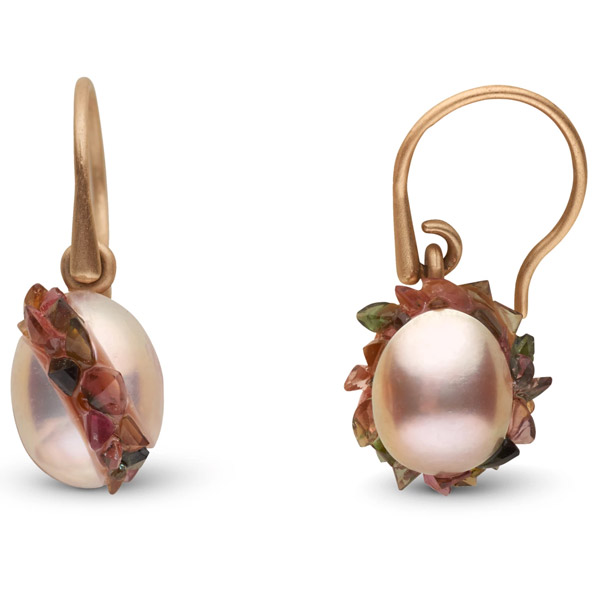 Pearls have a rich history, and yet despite their wide range of styles and appearances, they are continuously put into a steadfast box. When most people think of pearls, they instantly think of the classic strand. That’s not necessarily a bad thing—the pearl necklace is a staple in every jewelry store and in most jewelry boxes. But as we’ve seen over the years, pearls have so much more to offer in terms of design, and for some reason that continues to surprise us.

How many times can one hear the phrase “not your grandmother’s pearls” before the pearls, in fact, become ones worn by their grandmother? The opera-length strands of pearls worn wrapped around the necks of flappers in the art deco era (albeit many of these were faux)—are those our grandmother’s pearls? The Mise en Dior double pearl earrings from the last decade or so—do those belong to our grandmothers? And the styles pictured here, the ones so often labeled as not belonging to our grandmothers—how long before we accept that pearls, no matter how modern or classic, are just cool for everyone at any age? I am taking the saying here at face value, and interpreting it literally, when obviously it refers to the idea that the pearl jewelry of yore is old-fashioned, matronly. But it just doesn’t feel like it can properly describe pearl jewelry anymore, and so it shouldn’t.

I don’t mean to say that pieces like these don’t deserve heaps of praise and gazes filled with wonder. They’re feats of style because they do show the long pigeonholed pearl in a new and refreshing light and, in many instances, can change someone’s opinion on the stone entirely. It’s just that pearl has had ample time to prove itself more versatile than previously considered, and designs like these reinforce that fact.

“I think pearls are often passed down generation to generation, so when we see them in ultramodern designs, the implication is that the woman is buying for herself rather than to gift or pass on to someone else, which I believe says a lot about where we are today as women,” says Camille Parruitte, CEO and founder of Nouvel Heritage. “One of our bangles is called Lunch With Mom Mood bangle because we wanted to hint at the fact that most people associate the pearl necklace to their mother’s jewelry. Wearing a pearl on a bangle is a way to modernize it but still keeping the hint of sentimental value associated with pearls.”

It’s true that designers are appealing to a younger generation of shoppers with styles like these, and that’s part of what’s at play here too: Those who wouldn’t have considered purchasing a simple strand of pearls (just for example) might find they’re attracted to the gem in a different form. But millennials and Gen Zers won’t be the only ones to find these pieces amazing, and over time these styles will grow with them. So fast-forward any number of years, and the jewels, no doubt to be handed down, will indeed have been the pearls belonging to someone’s grandmother.