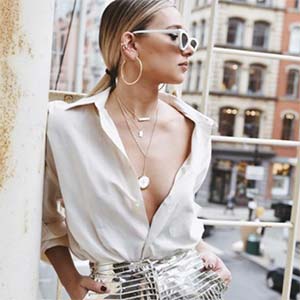 On Saturday, one of Instagram’s most followed style influencers, Danielle Bernstein (@weworewhat), posted a photo of herself wearing layered gold pendant necklaces and several gold earrings, including hoops and cuff styles.

In the caption, she wrote to her 1.8 million followers, “The news is out—I made jewelry! I’m beyond excited to announce the launch of #LuluDKxWeWoreWhat for @nordstrom.”

But within hours, the promo for a collection Bernstein co-created with Southern California jewelry brand Lulu DK (launching exclusively at Nordstrom on May 9) became a digital shouting match between the influencer’s faithful and Instagram users alleging that the collection copied a handful of designs from other jewelry brands—namely Foundrae, but also Retrouvaí and Bondeye Jewelry.

“I wouldn’t be proud of stolen work and/or designs. If you really want quality work, purchase from the ORIGINAL artist and creator @foundrae #foundrae,” wrote one commenter, while another posited, “She stole her designs from @foundrae.”

Comments defending the influencer included, “I see a lot of other designers influence’s here not only Foundrae. I don’t think it’s for the same client” and “No need to hate on someone this much [who’s] out there trying to hustle to make fashion more accessible for other girls like me.”

Beth Bugdaycay, owner of Foundrae, saw more than a little harmless “inspo” in the 27-piece collection.

The designer posted the same photo of Bernstein wearing the jewels on Foundrae’s Instagram, with the following caption: “This is not Foundrae. This is a costume line that #daniellebernstein of @weworewhat made for Nordstrom with the help of @lulu_dk. All complete copies. Tonight I feel crushed. Danielle came to my house over a year ago to see our jewelry and we let her borrow pieces several times. How is it not personal when you let a person into your home, let them wear your pieces, and then she knocks it off?? It’s an abuse of privilege, taking advantage of access. The buyers of Nordstrom also have a responsibility to protect design integrity and their PR team is creating consumer confusion by endorsing her as the designer which is not the truth. Honestly, I want to turn the other cheek but I need to call out when wrong is wrong.”

Bugdaycay went on to write that Lulu DK sent Foundrae a cease and desist letter in an attempt to “silence” her.

“On a positive note,” she added, “@nordstrom is looking into it further, and hopefully they will make the right decision and not put copies on their retail floor.”

Bugdaycay’s stand has resulted in Nordstrom opting not to carry five pieces from the collection that the designer and others (including fashion copycat watchdog Instagram @diet_prada) have alleged to be in violation of her copyright.

Nordstrom didn’t respond to several requests for comment for this story [see update below] —but Lulu DK’s press representative confirmed to JCK that the collection has been cut from its original 27 pieces to 22.

Bernstein’s representative also didn’t respond to a request for comment, but the influencer posted a statement about the situation to Instagram Stories last night (see it below), along with a “selfie” video of her crying against a wall, saying, “I just want to let everyone know…the inspiration behind this entire collection is this [holds up a locket necklace], my grandfather’s locket that I made so you guys can hold your loved ones close to your heart.”

In the statement, Bernstein didn’t admit fault or apologize. Instead, she doubled down, saying, “I would never in a million years deliberately copy or attempt to knock off another brand’s work…. My pieces are different from those saying I stole their designs.”

Bernstein also asserted that she personally decided to pull the pieces from the line, not Nordstrom. Bugdaycay suggests otherwise in an Instagram post from Foundrae this morning that reads, “Thank you @nordstrom for choosing not to carry the offending product in your stores.”

UPDATE: After this piece was published, Bugdaycay emailed JCK the following statement, “I found out about this collaboration on Instagram and I was motivated to share my frustration with how closely certain pieces looked like my designs. I wanted to set the story straight. Many designers face challenges with knockoffs, and I do not want to fall victim to that scenario, so I’ve fought to protect my collection and my brand.”

The designer demurred when asked which party made the decision to shrink the collection, saying only, “I was made aware that the pieces will not be sold, and am pleased that the parties involved in the collaboration arrived at that decision.”

A few hours later, a representative from Nordstrom emailed with the following statement: “We take situations like this seriously and partnered with Lulu DK and Danielle Bernstein to remove each of the pieces in question. We’re excited to offer our customers the chance to shop the rest of the collection on May 9.”

Coming May 9: vintage-inspired jewelry from Lulu DK x We Wore What

Nordstrom is promoting the collection on its social feeds. 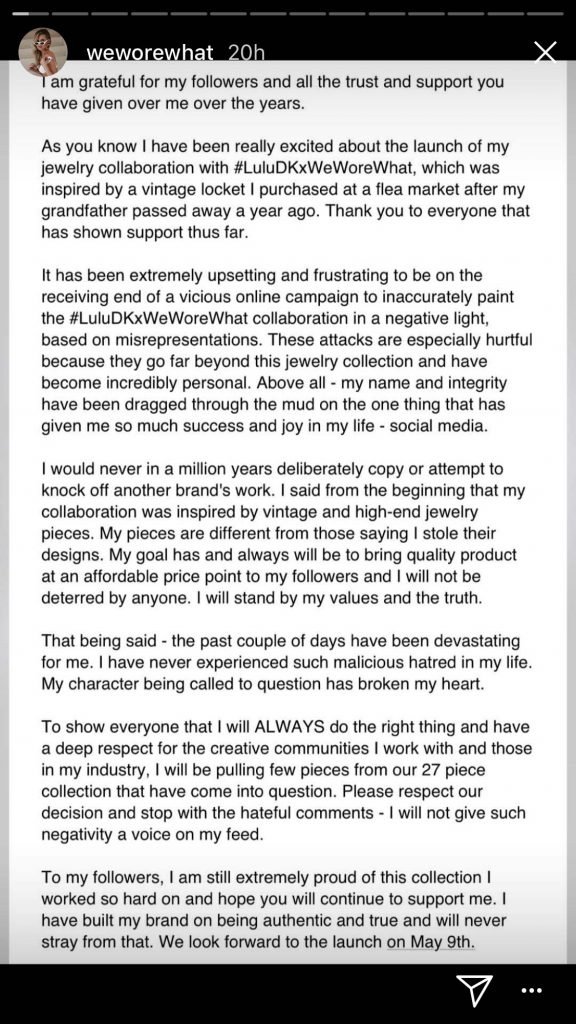 Top: Influencer Danielle Bernstein in pieces from her collection with Lulu DK (image via: @foundrae)