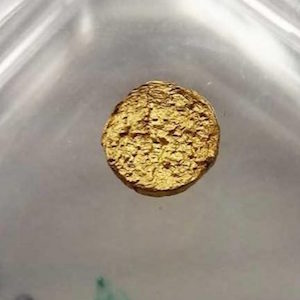 Scientists have developed a new alloy they say produces 18k gold that is five to 10 times lighter than the standard product.

Raffaele Mezzenga, professor of food and soft materials at ETH, believes the jewelry industry will embrace the new lightweight metal.

“Gold is a beautiful material but its density is high,” he tells JCK. “This will essentially have a density similar to aluminum but physical properties similar to plastic.

“It’s a matter of trade off between properties,” he adds. “If you want to go for something that is light and durable, this is a way to go. Traditional gold is 10 times more dense. It depends on what you want to do.”

He notes that some people find gold products too heavy.

“Gold earrings are often too heavy and uncomfortable; they pull on the ears. The same with necklaces. This will let you have a similar volume of gold. It will just be 10 times lighter.

But does the new alloy have the exact same durability as traditional 18k gold? Mezzenga can’t say for sure.

“My naive answer would be no,” he says. “Gold is gold. It’s perpetual. Plastics are long term but I wouldn’t compare the durability of plastic that of gold.”

He says that the new gold will be immediately identifiable by jewelers, who will feel its lighter weight.

The researchers can even vary the hardness of the gold by changing its content.

Mezzenga says the material can still be melted down for its gold content, but it will melt at a lower temperature as standard gold.

The team of researchers had previously created what they called the lightest gold in the world—a metal so lightweight it could float on cappuccino froth. But that proved too unstable, Mezzenga says.

“You couldn’t use it for anything,” he adds. “This you can use for all the things that you use gold for.”

More information can be seen in this ETH release, and a paper coauthored by Mezzenga in Advanced Functional Materials.

A video below from ETH Zurich demonstrates the metal’s properties: