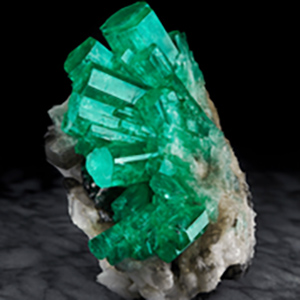 Anyone interested in geeking out on rare, natural minerals and stones will want to head directly to the Wilensky gallery, located in New York City’s Chelsea arts district. Aside from presenting these pieces as one would art, Wilensky has dedicated itself to holding a number of exhibitions as well. This fall, the gallery will host “Magnificent Emeralds: Fura’s Tears,” from Sept. 26 through Dec. 30.

“Fura’s Tears” refers to the mythological tale of how emeralds came to be. According to legend from the Muzo people of the Colombian Andes, an evil god transformed into a handsome man and seduced princess Fura away from her husband, prince Tena. When she returned to Tena, she had begun to age, as her promise of eternal youth was now gone since she had been unfaithful to Tena. Tena killed himself so he would not be alone. Fura’s tears of grief fell to the ground and became the green crystals.

Stuart and his wife Donna have amassed the gallery’s incredible collection of minerals and stones for more than three decades. “It was really the artistic aspect of minerals that attracted me,” Stuart told JCK earlier this year, noting he graduated with a master’s degree in art history. “It wasn’t the scientific one or the metaphysical one. It was really that these things were really objects of beauty, and I just said this is something I want to pursue. Honestly, the reason this gallery exists is that we came to a point where we wanted to expand the mineral world. We want more people to know what it’s about and more people to experience it.” Average prices are $50,000 and can reach in the hundreds of thousands of dollars.

On Sept. 26, the gallery, located at 173 10th Ave., will host the exhibition’s opening from 5 to 7 p.m. For more information, visit wilenskyminerals.com.

Top: Emerald on Calcite will be on view at the “Magnificent Emeralds: Fura’s Tears” exhibition at the Wilensky Gallery in New York City.