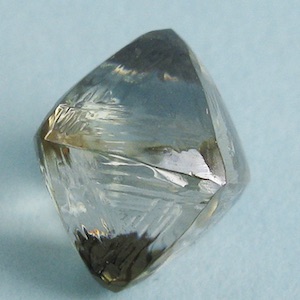 A Russian gem lab recently spotted a rough synthetic moissanite coated with a thin diamond film (pictured) and warned that coated simulants could prove “challenging to identify,” according to an article in the winter 2018 edition of the Gemological Institute of America publication Gems & Gemology.

The 5.35 ct. crystal’s “luster and thermal properties correspond[ed] to diamond,” said the note, credited to researchers at the Far East Geological Institute in Vladivostok, Russia. “Even with a very thin coating that did not exceed 0.001 mm., the sample tested positive for diamond.”

It warned that an “application of thin diamond films onto non-diamond material could be an issue for gemologists in the future.”

The transparent yellow octahedron was submitted as a rough diamond to the Far East Geological Institute, the note said.

Its face “showed a stepped appearance, and the edges had parallel grooves and combinational surfaces,” the story reported. “The faces and edges were smooth except for one face where mechanical damage was noticeable.”

A look at the stone through a gemological microscope revealed it had no inclusions typically associated with natural diamonds. Instead, it contained only small, parallel needlelike inclusions, a characteristic of synthetic moissanite.

The full note can be seen here.

The Far East Geological Institute could not be reached for comment.

(Images courtesy of the Gemological Institute of America; photos by: Vera Pakhomova)