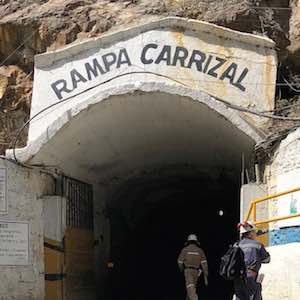 Look at the website of any mining company—even those that have gotten into nasty PR scrapes—and you’ll see pages devoted to social responsibility and environmental stewardship.

Yet, there’s a huge difference between how the mining industry perceives itself and how activists see it, according to Aimee Boulanger, executive director of the Initiative for Responsible Mining Assurance (IRMA).

“I can’t think of an industry where there’s a greater chasm,” she says. “Maybe oil and gas.”

And so, when IRMA was formed in 2006 by a group of miners, nongovernmental organizations (NGOs), and consumers of mined products (including Tiffany & Co.), participants knew it would take awhile to agree on a responsible mining standard. Few dreamed that it would take 14 years.

Luckily, Boulanger says, everyone stuck with the process.

“When you take that much time, you have a risk that everybody is going to get sick of it and leave the room,” she says. “But it’s a real blessing they didn’t. Some of them sat there from the very beginning, including some from the jewelry sector.

“But that 14 years’ effort means that the standard has trust and confidence. I don’t hear anybody calling me, saying that we have got the wrong metrics.”

IRMA released its first final Standard for Responsible Mining two years ago—though like all standards, it’s meant to be continually updated. Coming in at a whopping 200 pages, it boasts it’s the “most rigorous” standard for mines in the world. In fact, some have grumbled that it’s too tough—a criticism Boulanger says she’s “quite familiar” with.

The standard has 40 critical requirements—most of which are common for codes like these, such as not using child or forced labor. But what distinguishes it is there’s also hundreds of very detailed subrequirements, covering everything from community engagement to environmental impact. A third-party auditor rates how well the mines measure up.

And while not every requirement applies to every mine, Boulanger admits there’s “a lot” of dictates.

“I don’t believe that the requirements are hard to meet,” she adds. “All of the requirements in the standard are ones that are in practice at mines, but mines may not have [seen] financial value [in complying with] best practice in all of these topics before.”

She feels that the unusual level of specificity in the IRMA guidelines will prevent so-called greenwashing. An IRMA-audited mine can’t just say it has a “stakeholder engagement plan”—since nearly all of them do—but has to spell out exactly what its plan entails.

“A company can learn from this,” Boulanger says. “This was 14 years of effort across really diverse stakeholders, looking at what should be included in these programs. That’s why the guidance document in IRMA is hundreds of pages long. People don’t have to guess.”

The standards can also help miners plan for the unexpected.

This month, IRMA had a long-sought-after breakthrough: Carrizal (pictured, top), a medium-size lead, zinc, copper, and silver mine in Zimapán, Hidalgo, in Mexico, became the first company to be audited against the IRMA standard.

The audit took five days and included interviews with not just company executives but workers and community groups. The final result, posted here, is quite detailed—and not always glowing. According to the audit, in several areas Carrizal fell below 50% compliance with the standard, which IRMA considers its minimum level of achievement. Carrizal now has a year to set out a corrective action plan to hit that benchmark.

“Everything is common sense,” he says. “It’s not difficult. We have always worked very closely with the community.”

His biggest beef is that he believes the auditors focused too much on the mine’s lack of a union.

“The workers don’t like a union,” he says. “I told [the auditors] they didn’t want it. The workers told them the same. But how do you prove that? I don’t know.”

(The IRMA standard doesn’t require workers be unionized but says that management must “remain neutral in any legitimate unionizing or worker-organizing effort.”)

Boulanger says Carrizal “didn’t step into this to say, ‘Look, we’re the best in the entire world.’ They came in and said, ‘We’re pretty humble about where we are, but we want to have a better conversation with our stakeholders and distinguish ourselves for being transparent.’”

Boulanger says that these audits shouldn’t be looked at as a Good Housekeeping Seal of Approval.

“It’s not saying that here is the world’s most responsible mine,” she says. “It’s really about transparency. Carrizal is the first mine that has been audited against the full IRMA standard.… It is about having a more authentic conversation about what’s happening at the mine level so that purchasers, investors, and the community can be more actively aware of what the risks are.”

That will allow those mines’ customers to better understand their operations.

“If they are in your supply chain, you can go, ‘Okay. I’m not too concerned, I know what their weak points are.’ It’s just a lot more information than stakeholders have ever had at this level.”

She admits that right now, most mines don’t meet the full IRMA standard. Some may not even come close.

“It’s not pass-fail,” she says. “A number of have said, ‘Look, the market never asked us to do this before.’ They’re going to have to play catchup.”

Older mines may find the standard harder to achieve than newer ones, she admits.

“A mine that was built 25 years ago is going to have a different set of problems than one that’s built a year ago or five years from now,” she says. “The moment we just create value for new mines, that’s counter to our mission. We need to create value for mines that have been around for decades so they can improve.”

IRMA is also looking at standards for artisanal mines, which are often left out of discussions like these; their standards are often quite lax, and they don’t have big companies backing them up. Yet, their advocates say, they also employ the poorest, most vulnerable workers in the chain, who would be hurt if buyers engaged in a de facto boycott.

“That would be trading one harm for another harm,” Boulanger admits.

Yet, even for the biggest, most modern operations, IRMA audits may not always paint a flattering portrait. Couldn’t that be a risk for a producer that is image-conscious—as most are these days?

Boulanger thinks the audits serve a real market need. As companies feel increasing pressure to clean up their supply chains, buyers like Tiffany & Co. will require them. BMW is already asking vendors to buy from IRMA-audited mines.

“They’re putting it into their procurement contracts, saying, ‘Look, the mined copper that goes into our cars, we’re going to expect at some point that it comes from a mine audited against the IRMA standard,’ ” she says.

The IRMA audits shouldn’t be looked at as solely negative, she says; they reward those who go above and beyond.

“Most mines operate to legal compliance in the jurisdiction they are in. But there are some that have exceeded legal compliance. Now, instead of just saying, ‘Trust us,’ this is their opportunity to distinguish themselves and say, ‘Actually, we’ve been doing more,’ and get market recognition for that.”

IRMA certification can also be used to back up other certifications, such as SCS Global Services’ program for “responsibly produced diamonds.”

Boulanger notes that mining giant Anglo American has agreed to get all its mines audited, and at least 13 more mines are up for IRMA audits, including deposits that produce diamond, gold, and platinum. She expects more will line up soon.

“Our society relies on the industrial extraction of these materials, whether it’s for green energy or for jewelry or phones or cars or buildings. So what are the impacts there? Let’s have an honest conversation about that.”

Disclosure: The author’s wife was previously part of an IRMA steering committee.

(Image courtesy of the Initiative for Responsible Mining Assurance)