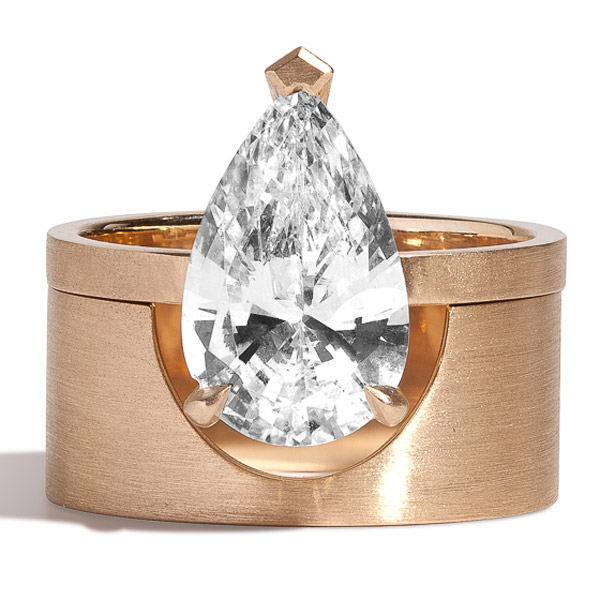 Since we are now in the midst of the new ’20s, I’ll happily look for parallels in design to foster proof that we’re entering into an era of the “modern Art Deco”—true or not, I want it to be so.

Which is why I jumped right on this new collection from Shahla Karimi. The New York City–based brand’s new effort is dubbed Mid-Century, and is an ode to famed architects of the era.

Okay, so mid-century is technically attributed to the middle of the 20th century, but if I try really hard, I can make this fit my desire—the Art Deco period ended in about 1935, while mid-century is noted to have started in 1933. That’s two years of overlap. I’m declaring it a win.

Regardless of era, the collection—made using ethically sourced materials such as recycled gold and platinum—is fabulous, paying homage to a time that has passed, while staking its claim in the future of design. Customers have their choice of natural diamonds (complete with GIA cert) or lab-grown diamonds (with IGI or GCAL certification). There’s your present and future right there.

As for the past: the work of architects Louis Kahn, Mies van der Rohe, and Frank Lloyd Wright inspired the design for this collection, with attributes such as Kahn’s geometric, van der Rohe’s “less is more,” aesthetics, and Lloyd Wright’s iconic “Fallingwater” house. All were considered pioneers in Modernism, which suits this line of jewelry very well.

While I myself am most drawn to the heavy metal styles inspired by Rohe’s work, Mid-Century has enough variation to please a crowd, but a cohesiveness that makes it all work beautifully together. A customer could most certainly build quite the collection for themselves by acquiring more than one piece—if the budget allows. And with pieces starting at $125 going to about $26,000 (depending on choice of diamond), there’s a lot of wiggle room to play with price.

You can see more of the collection on Shahla Karimi’s website.