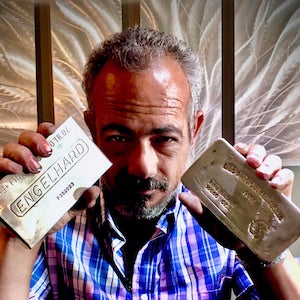 When Johnny Perri (pictured), owner of J&M Jewelers in Washington, Mich., decided to close his store for good after being forced to shut down by COVID-19, he could have disposed of his inventory the old-fashioned way—with a liquidation sale.

Instead, he decided to turn his retirement into a long, elaborate game by burying approximately $1 million of his remaining inventory throughout Michigan.

The idea for the Treasure Quest came to him when he was growing antsy at home during lockdown, he told local TV news station WXYZ.

“I was going nuts, going back and forth, trying to find something to occupy my time,” he said.

Then he read about a big gold find, decided that was “cool,” and hatched a scheme to hide everything he had.

He and his wife, Amy, crisscrossed the state burying his entire inventory—including gold bars, old estate pieces, and engagement rings—in different locales, many of which have some personal significance to Perri.

“We had the time of our life burying things,” he told WXYZ. “It was just awesome.”

The hunt works like this: To sign up, you need to pay a $49 fee, which will fund what he calls his “alternative retirement plan.” Perri will then send registrants clues and hints to where the treasure is.

“You follow the riddle, you have a little wit, a little adventure in you, you’re going to find it quick,” Perri told Fox 2 Detroit.

The first hunt, which has already sold out, will begin Aug. 1. Perri has hidden two 100-ounce bars of 0.999 pure silver, with an estimated value of $4,200, in Oakland County, Mich. The winner of that prize—as well as any others—will have to option to keep it or to sell it back to Perri.

The official treasure hunt site mentions a few precautions. It warns hunters to follow the standard safety guidelines for COVID-19. In addition, the treasure will be buried under or near a painted “X.”

“’X’ will always mark the spot,” according to his site. “Please be respectful of property by not digging up the town.”

All the property is accompanied by GPS trackers, so Perri can track if it was found—though, as he admitted in one interview, it’s certainly possible that someone could find the items without the clues.

Beyond that, he hopes  that, during these difficult times, people will get outside and enjoy the thrill of the hunt as much as he enjoyed setting it up.

“Giving people adventure is giving them something to believe in again, besides this COVID crap,” he said.