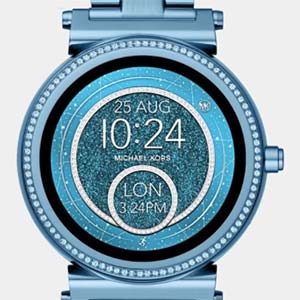 The brand has released photos of its forthcoming Sofies, and the new models feature glitter-embellished bezel faces in a variety of different hues, including bright, light blue, and rose gold.

The company will debut a new selection of bands for spring, too. All Access bands are interchangeable.

The watches, which are produced by Fossil Group, will boast the same tech inside as their predecessors.  They run on Google’s Android Wear 2.0 operating system, track steps and fitness, and feature Google Assistant.

But users can now access two new micro-apps from Michael Kors that are embedded in the existing proprietary watch app. The first, dubbed My Social, lets users borrow photos from social feeds to use as custom watch faces. And the second, called My Next, counts down the days and time to an important event or occasion.

News outlet Wareable talked to Fossil Group about the watch recently, and the company shared that the Access is “the most popular of the fashion group’s Android Wear smartwatches.”
Hence, the splashy new update.