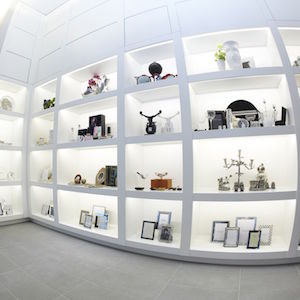 Michael C. Fina, an 85-year-old New York City jeweler that shut its brick-and-mortar store in 2016 to make a go of it online, is now closing for good.

“We have found the emotional aspect of the Michael C. Fina in-store experience…was not something we were able to replicate online,” said a note posted on its website. “As today’s consumer continues to shift to a virtual marketplace, we explored all our options to determine the best way to proceed and it is with heavy hearts that we have decided to close.”

The brand began in 1935, when Michael Charles Fina asked Rose Rosenblatt for a $500 loan for his business. She replied, “I will invest in your idea, but I want to be your partner.”

They soon opened up a wholesale silver showroom on 47th Street in New York City. Six years later, they were married, a then-rare union between an Italian Catholic and a Polish Jew. In the 1950s, the company opened its first retail location on 580 Fifth Avenue, on the corner of the Diamond District.

The store, which also sold home decor, drew a heady clientele including Frank Sinatra, Estée Lauder, and Thomas Watson Jr. (the second president of IBM). It even provided the silver for the inauguration of President John F. Kennedy in 1961. The location eventually encompassed 12,000 square feet.

By 1998, it was bursting at the seams, and it moved to a 20,000-square-foot location at 545 Fifth Avenue. A year later, it was the first jeweler to offer an online wedding registry, it says.

In 2013, it downsized to a 6,500-square-foot space at 500 Park Avenue (pictured). Three years later, owner and chief merchant Steven Fina told JCK that keeping a store open in New York City had become too expensive.

Steven Fina, who now works for Spectore Corp., did not return a request for comment.

Still, the decision to finally pack it in clearly weighed on the third generation to run the storied brand.

“As a family, we have always wanted to do the right thing by our customers and vendors,” said the site. “We are eternally grateful to all of you who have been part of the Michael C. Fina brand. We want to thank you for sharing your weddings, anniversaries, birthdays, and all of the other happy occasions in your lives. It has been our privilege to serve you.”