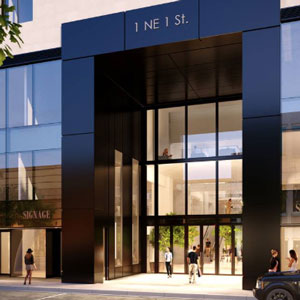 The nine-story Metro Mall in downtown Miami was once the heart of the the city’s jewelry district. But like so many other jewelry districts that thrived in the early and mid-20th century, it had lost its luster, good looks, traffic, and robust tenancy over the past few decades.

Now a developer is aiming to turn back time on the historic building and in doing so reclaim its former stature in Miami’s bustling jewelry business.

Originally constructed at 1 NE 1st St. in 1926, the building is undergoing a $35 million renovation at the hands of developer Time Century Holdings LLC, which plans to revive it as a center for jewelry wholesalers, retailers, craftspeople, and repair services. The company purchased the ground lease on the building in 2018 for $14.5 million. Once complete, the center will have four floors of “luxury jewelry retail” and wholesale space and four floors of office space. Miami architect Kobi Karp is helming the design of the 225,054-square-foot building, which will reopen in spring 2021. Tenants haven’t been named, but the center’s currently at 40% occupancy, according to Time Century Holdings.

Miami’s jewelry district is the second-largest in the United States, behind New York City’s. It’s home to more than 500 jewelry stores in a four-block radius and generates more than $1 billion in sales annually.

Time Century Holdings’ CEO Yair Levy said in a prepared statement, “There is no other jewelry center like this in Florida. We gutted the entire interior of the building so we could have a blank canvas to start new with our own design. I traveled around the world visiting iconic buildings to find inspiration for Metro Mall’s design and finishes. Our goal has always been to bring the building back to its glory days.”

Top: A rendering of what the Metro Mall’s facade will look like (photo courtesy of Time Century Holdings LLC)