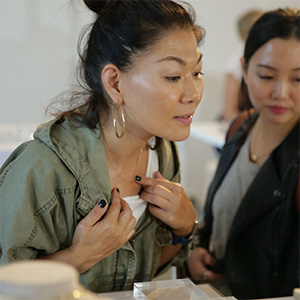 While the New York City–based show is still thriving—and successfully spun off the innovative Jewelry Independent Summit last year—founder and owner Lee Stevenson told JCK exclusively that the company is launching a series of pop-up shops, dubbed Finery Row, that will bring many of its stalwart brands to major metropolitan areas in the United States over the next year.

Finery Row will debut in Washington D.C. this September before heading to New York City. Other cities on the list, but not yet confirmed, include Dallas and Miami. Each pop-up will run two or three days.

Stevenson says the ephemeral retail model is ideal for many of its small, independent Metal & Smith partners—and is a logical next step for the company.

The event producer launched Metal & Smith in 2016 (with partners who are no longer involved), armed with the mission of simplifying the traditional trade show model by making it more financially accessible—and more turnkey—for emerging designers.

But two edits into Metal & Smith, Stevenson recalls noticing “the need for designers to engage with consumers.” She explains, “We asked ourselves, ‘How do you really reach out?’ It’s hard to cut through the fat on social media. We realized small brands were really hitting this wall.”

Consumer shopping days were eventually integrated into the Metal & Smith calendar, but Stevenson felt the company needed to take it a step further: “It became clear that some brands don’t want to deal with wholesale. So in the middle of last year, I said, ‘I think our next thing is doing a tasteful pop-up that we take on the road.’ ”

Finery Row will travel to metro areas where “there’s a high concentration of women and men looking for jewelry,” she adds. The company is currently researching spaces Finery Row can ideally rent for a long weekend, that are located in walkable (or metro-accessible) neighborhoods. “We’re not going to lock spaces down until we get an idea of the number of people interested,” she says. “We’ve found there’s always a wonderful space available, but it’s not always the perfect space.”

She hopes to feature 50–60 brands at each pop-up that represent a mix of price points and jewelry types, including fine, demi-fine, art, and costume.

Stevenson stresses that Finery Row’s pop-ups are designed to bring brands to new markets, not only showcase local brands (in NYC there will certainly be lots of local designers).

“Designers have to understand that it’s a big world, and you don’t know where you’re going to take off,” she adds. “The only way you know that is by putting yourself out there.”