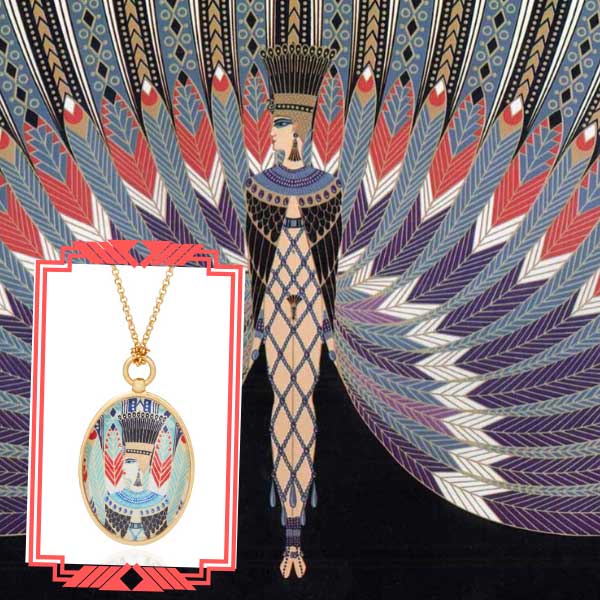 Last week, The Metropolitan Museum of Art store dropped a collection celebrating the distinctive work of Erté, the Russian-born French artist Romain de Tirtoff (1892–1990), who is often known as the father of Art Deco.

Erté, whose name was derived from the French pronunciation of his birth name initials, R.T., enjoyed a multifaceted career as a costume and set designer, but he is especially renowned for the magazine covers he created for Harper’s Bazaar from 1915 to 1936.

Standouts include a statement necklace and a pair of earrings inspired by an Erté original openwork fan design for Zizi Jeanmaire, a French ballet dancer who was also the artist’s great friend. You can see the fan captured in the artwork below, in which Jeanmaire appears as a flapper in a red dress draped in cobwebs—and a spider—of black beads.

Also of note is a pin inspired by the artist’s design for the opening curtain of the 1927 Broadway musical Manhattan Mary.

Other quintessentially Erté Art Deco motifs, such as rayonnement and peacock plumage are captured in the suite below.

Here are a few more, because they’re just so well done (and wonderfully affordable).