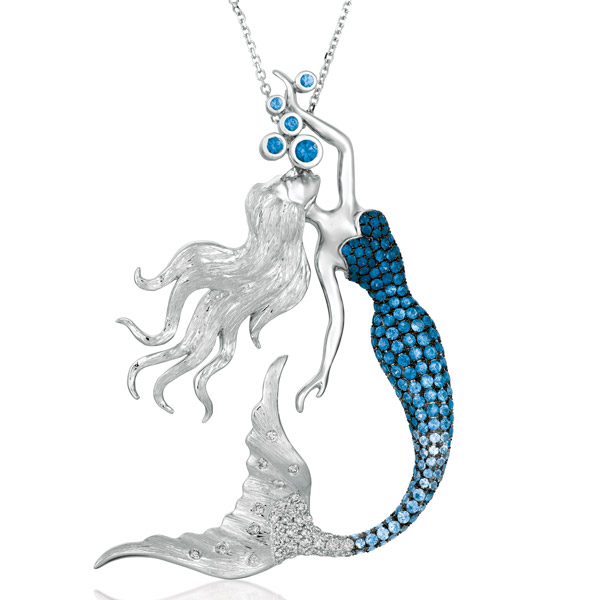 I recently returned from a vacation in Hawaii, so at the moment I’m all about anything ocean- or island-related. It helps that prior to this trip, I saw my fair share of seaworthy jewelry at JCK Las Vegas.

Seashells, sea turtles, and all manner of animals and objects in between, if they have you thinking “beach,” they’re probably in style and readily available on the market.

Let’s talk mermaids, though. Of those, there were a few. Le Vian’s assortment of mermaid-themed jewelry (one pictured at top) got me super hyped to see more of the icon, and I did—but not nearly as many as I wanted.

My introduction to mermaids (perhaps some of you can relate) came the Disney way, when the fiery redheaded Ariel swam across my screen, singing about how she longed to be human. But did you know that Disney’s The Little Mermaid is based on the Hans Christian Andersen fairy tale that is far, far darker than the cartoon you may have grown up with? I mean, there’s some seriously messed up stuff that happens in this story. I won’t regale you with it, but if you aren’t familiar, you can read this summary.

But the mermaid goes back much farther than Andersen’s 1837 tale. Sirens, which aren’t exactly mermaids but are said to have inspired some of their attributes, date back to ancient Greek mythology. According to the Greeks, sirens were not nice creatures—by using their enchanting voices to sing, they would lure nearby sailors to the rocks, where the sailors would wreck their ships and, probably, lose their lives to the sea. Through the years, our stories and imagery of mermaids have softened, from sailor-drowning monsters to pretty young women who sailors might bring home to King Dad.

Today, mermaids are sort of like Bigfoot: We’re as sure as we can be that they don’t exist, but that doesn’t stop people from claiming sightings, and it certainly doesn’t stop them from asking Google of their existence, just to make sure (if the National Ocean Service has to have a page about it, it’s probably a question they’ve gotten more than a few times).

Whether your version of a mermaid is the magical, wondrous kind, waiting to befriend humans (like my daughter’s beloved mermaid doll, “Leialoha”) or the malevolent, cruel kind (which can range from the catty teen mermaids in Disney’s Peter Pan to the terrifying lake monsters with teeth from Harry Potter), aren’t mermaids just fascinating? Personally, I find that the “scarier” versions make for more intriguing tales—and the ones that would serve to inspire some really badass jewelry.

If your customers are head over heels for the oceanic styles that appear to be making a splash in the market this summer, they may also be drawn to the magic of mermaid jewelry, too. These are some of the styles that I have come across recently, but if you know of or have designed your own, please email me! I’d love to do a follow-up of even more styles starring this iconic creature that I’m developing a slight obsession with. Who’s with me?