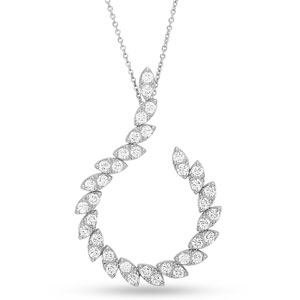 Mayors has announced that it’s partnering with iconic Italian jewelry designer—and longtime Mayors staple—Roberto Coin on a capsule collection that will be exclusive to the Miami-based fine jewelry chain.

The Marquesa collection, priced from $3,000 to $29,000, harnesses a decidedly classic, 1950s-feeling aesthetic. Fabricated in 18k white gold, the pieces feature small round diamonds clustered closely together on marquise-shaped gold settings. The resulting look is that of a jewel composed of large and repeating marquise-cut diamonds.

Each piece in the collection also bears the Roberto Coin brand signature: a small ruby cast inside each piece. The ruby is meant to relay good wishes to the wearer; Coin has used it on all his pieces since discovering that ancient pharaohs considered the ruby a magic stone when it’s in close contact to the skin.

The Marquesa collection will be sold exclusively at Mayors; the collection will debut at the retailer’s Merrick Park shopping center flagship in Coral Gables, Fla., and will also be available online.

“The driving force behind the Mayors and Roberto Coin capsule collection is a strong commitment to fine craftsmanship, elegance, and charm,” David Hurley, executive vice president of the Watches of Switzerland Group, which owns Mayors, said in a statement. “We feel confident that the Mayors and Roberto Coin collaboration, which has been 30 years in the making, effectively speaks to the modern woman.”

Mayors was founded in 1910 by Samuel Mayor Getz, and was acquired by the Watches of Switzerland Group in October 2017 for $104.6 million. The company operates 15 stores in Florida and Georgia.

Top photo: Necklace by Roberto Coin for Mayors, part of the brands’ collaborative Marquesa collection (all photos courtesy of Mayors)