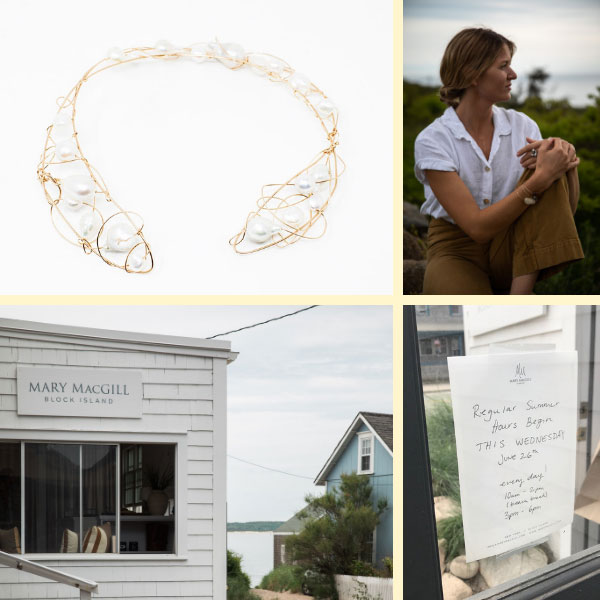 Somehow it took a New York PR firm to alert me to a jewelry designer who’s based part-time on Block Island, where I’ve been spending my summers for more than four decades, but no matter. That Mary MacGill and I share a connection to this tiny, teardrop-shaped land mass off the coast of Rhode Island was all I needed to know.

Last week I arranged to meet with her and see her collection in person, at the height of the season, when the water is at its swimmable coolest and the tiger lilies, privet, and rambling roses are in peak bloom.

When I arrive at her eponymous boutique on prime Dodge Street, along the path to Baby Beach and across the way from the Blue Dory Inn’s exquisite gardens, MacGill is unpacking a portable glass case full of her pearl and cabochon gemstone jewelry from that morning’s farmer’s market.

“I started out at the farmer’s market eight years ago,” says MacGill, who has been vacationing on the island since she was in utero. “I always took stock of the people shopping there who were buying crafts, clothing, and fresh produce, and decided I would try to keep the entry-level price point around $95, which feels extremely luxurious, but not out of this world. Because I wanted to stay accessible to people who want to buy something to take something home to remind themselves of Block Island, but still appeal to people who really appreciate well-made things.”

The shop is about the size of a walk-in closet, and it includes a rack of breezy, linen beach dresses by indie designers, art books, lamps with stylized nautilus bases, and sandals from a line called Anthology Paris.

But clearly, the real draw is the jewelry—light, airy, and organic in feel, starring baroque pearls, moonstones, and moss aquamarines.

As I poke around the boutique, a young woman enters: She’s making a return trip, after buying a pair of $95 black keshi pearl studs in 14k gold just 20 minutes earlier, to buy another pair. This time it’s a pair of roundish white pearls—thus creating a chicer-than-chic ear stack. And a tangible reminder of her day on the island for eternity.

MacGill suggests we take a walk on the beach and we do, talking shop against the backdrop of waves gently crashing, both of us barefoot. A black Lab wanders up to say hello. I ask her why jewelry makes such a great souvenir, even though I know the answer.

“Jewelry is so reminiscent of a place,” she says. “After graduating [from Brown] I went to Greece, and the first thing I bought was an aquamarine set in gold with a silver band. If you’re at a 9-to-5 job, it’s nice to be able to glance down at your hand and be reminded of a different time and place.”

MacGill learned the art of metalsmithing at eighth-grade summer camp and was mentored by the late jewelry designer Kazuko Oshima, a family friend who was sold exclusively at Barneys. MacGill also worked at David Yurman for two years before launching her line. She currently splits her time between her Block Island boutique and an additional retail location in Germantown, N.Y., a riverside hamlet in Columbia County, where traffic tends to surge around mid-September.

This summer, customer appetite is focused around MacGill’s new “Floating” series, set with a compelling array of pastel cabochon stones. “They’re set in wire, so it looks like they’re floating, and light can stream in through the sides of the stones.  That’s been my passion project this summer and luckily people are gravitating toward it.”

The moss aquamarines, with their unusual pale, sea-green color, have been popular. They’re also one of MacGill’s personal favorites. “It’s my heart stone,” she says. “I see it and my heart just collapses.”

She uses similar language to describe how the island’s landscape, a substantial part of it protected by a Nature Conservancy, inspires her work. Her family’s home on the West Side, with its prime sunsets, stonewalls, and rambling greenways that lead to the bluffs overlooking Long Island Sound is just one example. “Driving down my driveway, my heart just melts,” she says.

Top: Clockwise, from left: Baroque pearl collar, $925; designer Mary MacGill in her element; the Block Island boutique’s store hours include a midday “beach break;” the boutique is located within steps of the beach.