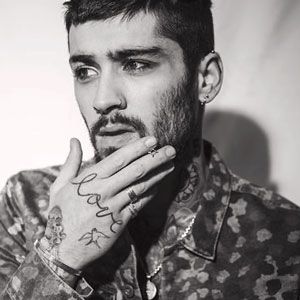 Sterling silver jewelry brand Martyre is one of several new collections that is designed—and described—as unisex. Eva Fehren released a gender-fluid collection earlier this year called XX/XY, as did NYC’s Undefined, a direct-to-consumer brand that specializes in simple but edgy sterling silver.

Martyre, based in Los Angeles, entered the market in 2018 with a splash, buoyed by the power of young celebrity and a massive social media following. The collection was founded by well-known model and social media celeb Anwar Hadid—the brother of supermodels Gigi and Bella Hadid, he has three million followers on Instagram—and musician Yoni Laham.

Neither founder has a background in jewelry, but both are tastemakers for a certain subset of Gen-Z consumer—and are big jewelry wearers themselves. In his Instagram posts, Anwar is almost always seen wearing at least a chain and earrings.

Core pieces in the collection range in price from $95 to $3,000, and include silver pendant necklaces and rings featuring religious iconography and stamped messages.

One stack of three rings, sold together, spells out “Pray for Us,” the brand’s official tagline. The phrase Every Sinner Dies a Saint is also stamped on several pieces, as is the Martyre logo, which is boldly emblazoned across the tops of squared-off silver rings and bracelets, and on pendants—a choice that would suggest the founders believe their brand name has (or perhaps will develop) solid cultural status. The Instagram followings for all involved suggest that outcome is a distinct possibility.

Martyre released its latest collection with a campaign starring singer-songwriter Zayn Malik—boyfriend of Anwar’s sister, Gigi—shot in black and white by photographer Alana O’Herlihy in her NYC apartment. The new photos were splashed across social media, and the brand’s website, beginning Tuesday.