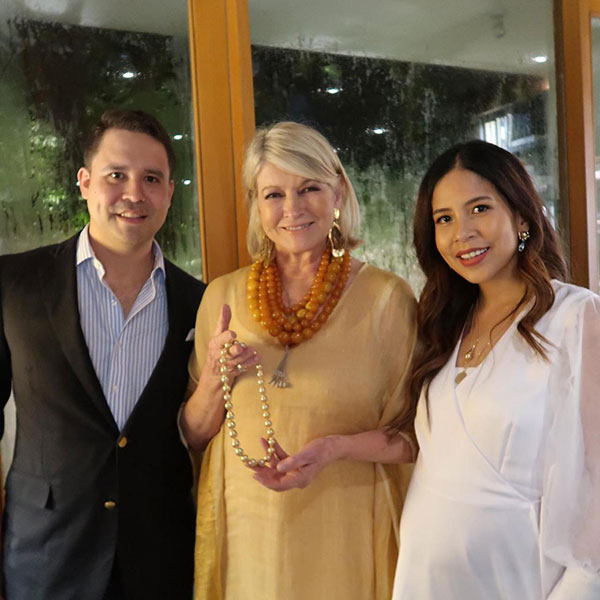 Last month, world-famous entrepreneur and domestic lifestyle luminary Martha Stewart documented a recent trip to the Philippines on her blog. Her travels to Manila and neighboring regions were centered on her appearance at the ANC Leadership Series (ANC is the country’s ABS-CBN News Channel, a 24-hour English language cable news network).

But look closely at the any of the photographs in which Stewart herself appears, and one thing stands out: her necklaces.

For her ANC leadership talk, she paired a superchic Lanvin shirtdress with a long strand of oversized baroque pearls. Later that night, she attended a dinner at the home of Doris Magsaysay Ho, president and CEO of the Magsaysay Group (one of the largest conglomerates in the Philippines) wearing piles of oversized opaque amber beads (see photo at top).

Several local artists were in attendance and presented their work to Stewart in between courses of the lavish meal, which included a clam/ginger soup served in a green papaya, glistening crab claws, and a million other delicacies.

Among the featured artist guests was the pearler Jewelmer whose lovely work with golden South Sea pearls has been featured on All That Glitters on several occasions.

Jewelmer sent out a dispatch about the “warm encounter” with Stewart this morning, which intrigued me enough to look into it further. It referred to her as a pearl aficionado—and a quick Google image search indeed confirms this.

But whenever someone comes back from travels abroad, my question is always: Did she buy any jewelry? Some pearls from Jewelmer, I presume?

All I know is Stewart’s wearing a very nice strand of goldens here and in the photo below, which she posted on Instagram just yesterday. (The other pearl necklaces she’s wearing in this shot are pretty spectacular, too. See? Pearl aficionado.)

Maybe they were a gift? The golden South Sea pearls would be the perfect memento of her journey to Philippines. Souvenir jewelry is my weakness, too. How about you?