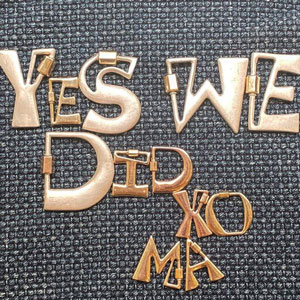 “Nobody needs to see another letter in jewelry, for the love of God!” jewelry designer Marla Aaron says wryly, before asking, “Am I right?”

Despite this (painfully true) assessment, the New York City–based designer recently fell in love with the idea of rendering every letter of the alphabet as a precious metal “lock”—her trademark metal screw-close carabiner. And like everything Aaron makes, the series is totally unique and designed to the hilt. Aaron needn’t worry that she’s adding to the glut of alphabet jewelry circulating in the market. If sweet little stamped letter pendants are Finland, Aaron’s in-your-face letter locks are Australia.

A preview of the collection posted on @marlaaaron

Aaron and her team designed all 26 letters in a chunky, artfully crooked-looking Bauhaus style, in both large and small sizes—a project that’s taken over a year.

A circa-1930s Berlin-born typeface served as a guide for the letters, but their lines and curves were also inspired by the current cultural moment, in which “this great androgyny seems to be very prevalent,” says the designer. She publicly debuted the first letter locks, “R” and “M,” on British designer Roland Mouret’s runway earlier this month (see the story on that here), unannounced. “Everyone thought I made the letters for the show, you know R and M for Roland Mouret. But they’re actually part of this new collection that’s been in the works for a long time.”

The brand, which debuted the letter locks today on its website, plans to roll out a series of images based on iconic Irving Penn photographs to promote the alphabet range. “It was the coolest photo shoot, and we got the coolest images,” Aaron says. “I can’t wait for everyone to see them.”