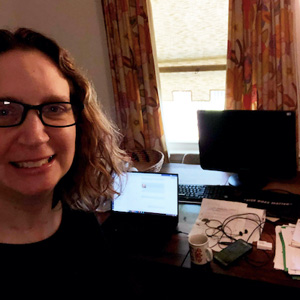 Every Thursday during the pandemic, we’ll be checking in on members of the jewelry trade in an attempt to glean shareable tips and tricks for a better and more productive quarantine (and for some, reopening).

Today we hear from Susan Thea Posnock, director of public affairs and education for Jewelers of America (JA). Posnock is married to JCK news director Rob Bates, and the hardworking pair are currently quarantined with their 6-year-old son, Michael.

JCK: Hi, Susan. You live in Manhattan—are you guys still quarantined there?

Posnock: We were for about a month after the lockdown, but now we’re in a house Rob’s dad still owns in New Jersey. Mikey’s schools closed around the third week of March, and the JA offices switched to telecommuting around that time. From that point until the end of April we were in our apartment almost exclusively except to take out the trash or run to get something essential from the drugstore.

We have a two-bedroom apartment, and I would be going into one room to do meetings, and Rob would be going into another. Rob recorded two JCK podcasts [The Jewelry District] in one of those rooms. When he was recording, I had to put a “do not enter” sign on the door.

We were going stir-crazy, and we knew early on that this house was potentially available, but no one’s lived in it for five years. It’s not updated or luxurious, but now we have space. It’s nice for Mikey to be able to safely go outside and not be paranoid about him touching something and then touching his face.

I picked up a rental car really early one morning, and we drove out. It was really strange—I’d never experienced this before: New York City was a ghost town. There was almost no traffic.

When the city opens again, we will definitely go back. But we don’t know what’s going to happen with schools and camps and the rest…we’re playing it by ear.

What’s your work been like? Jewelers of America is open and very busy, right?

Everyone is really busy. We have regular meetings on Microsoft Meetings. We’ve been full-on busy converting our second annual Jewelers of America National Convention, which is happening next week, into a virtual event. We made the decision to switch to virtual, and it’s going to be free for JA members, and we’re also offering free memberships right now, so it’s a win-win for people in the industry [find info and registration for the conference here]. That’s been a lot of my focus. It’s a lot of work trying to make these shifts so quickly.

We’ve also done a ton of webinars for the industry, first talking about issues during the deepest part of the crisis, and now we’re sharing more information on the reopening. Some weeks I’ve put together four webinars.

We’ve also been looking ahead and trying to figure out what the industry will look like [after the pandemic]—talking to industry leaders including GIA, De Beers, Jewelers Mutual. I think the associations in particular have been busier. I feel busier! I was up until 3 one morning finishing up a guide to reopening.

It’s been crazy, but I feel we’ve been helpful to the industry, and that makes me feel good. We’ve been putting things out that are going to help folks get through this.

Where do you think the jewelry industry will be after the pandemic?

Ultimately, I think the jewelry industry is going to thrive again. People want to buy jewelry…. It’s like in every crisis—the folks who make it through will emerge stronger. We just hope we can play a role in getting people through this difficult time. Stay healthy, stay safe, stay in business.

What are you doing to decompress during quarantine?

Mikey and I did watch the entire season five of She-Ra. I’ve also been waking up earlier than I would usually wake up. And rather than finding it to be stressful, it’s actually been nice. I like waking up and before Rob and Mikey. Now that I’m out here, I have that quiet time for myself. I can look out in the yard and see trees and birds, sometimes a baby bunny—nature! I’m a New Yorker, I get excited about seeing animals. We saw a deer one day walking across the yard, and there are little chipmunks. That morning time is my time to have those moments and prepare for the day.