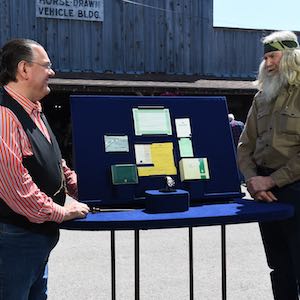 A white-haired former Air Force veteran collapsed with shock when he learned his vintage Rolex was worth hundreds of thousands of dollars on the Jan. 27 episode of Antiques Roadshow.

During the show, taped in West Fargo, N.D., the unidentified vet told appraiser Peter Planes that he purchased the Rolex Oyster Chronograph in November 1974 while stationed in Thailand. He paid $345.97 for it, via the Air Force base exchange.

The man originally bought the watch because he thought it would be good for scuba diving, but when he got it, he changed his mind.

“I looked at it, and I said this is really too nice to take down into salty water. I just kept it.”

After he left the Air Force, he stuffed the Rolex in a safety deposit box—where it stayed for 40 years.

“I only took it out two or three times to look at it,” the man said.

Planes told him that the watch was an ultra-collectible Oyster Cosmograph.

“Collectors love this watch because Paul Newman wore it in a movie called Winning,” he said. “The one that Paul Newman wore, currently at auction, those watches are going at auction for approximately $150,000 to $200,000. Your watch is more special. It says ‘Oyster’ on it. They did that for an extremely short period of time.”

He said a “watch like this” is worth about $400,000 at auction—causing the man, literally, to fall to the floor.

When he got up, Planes said he was just getting started. He noted that the man kept all the original documentation, and since it was never worn, it had no wear on it, and the reference number hadn’t worn off. Because of its condition, the watch could fetch at much as $500,000–$700,000 at auction.

“It’s an absolute fabulous find,” Planes said. “It’s one of the rarest Paul Newman models. In this condition, I don’t think there’s a better one in the world. I can’t thank you enough for bringing me one of the greatest watches I’ve ever seen on Antiques Roadshow.”

Planes closed by warning the man not to wear it—as that will bring its value down to a mere $400,000.

The video has garnered 7 million views on YouTube, and can be seen here: