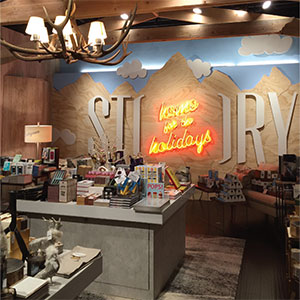 The people who write about retail are wild about Story, the 2,000-square-foot New York City boutique that has the “point of view of a magazine” and rotates its format every four to eight weeks, with each “story” built around a different, sometimes-corporate-sponsored theme.

But what’s noteworthy is not just the idea of an ever-changing store, but the novel and often surprising ways the retailer brings the ideas to life. For instance, for “His Story,” devoted to male grooming, the store offered free shaves.

Retail “is not just about selling things, it’s about experience,” Story founder and CEO Rachel Shechtman has said. “Experience sells things, not the place. If you’re not actively trying to open [a customer’s] pocketbook and you give them an experience, you will have mind-blowing results.”

Commenters have hailed it as the epitome of the “reinvented” modern retail—and strikingly, it doesn’t do e-commerce.

So the news this week that Macy’s has acquired Story would seem to be cause for celebration.

And yet, when I talked to veteran luxury analyst Pam Danziger of Unity Marketing, she was more skeptical. While a big fan of Story, she warned that Macy’s had done little with another acquisition, beauty brand Bluemercury.

“My feeling, which I hope is wrong, is that Rachel will work out her contract and then be off, leaving behind a potential for Macy’s that will never be realized,” she said.

Which leads to another issue. Everyone agrees the ideas that animate Story are great—and the execution, fantastic. But that doesn’t mean they will work at Macy’s.

Take the case of Ron Johnson, the former head of Apple Stores who had stormy 17-month tenure as CEO of J.C. Penney. Johnson had a lot of bold “experiential” ideas for Penney—including a public square that would host events like yoga classes. But even if you believe his ideas were ahead of their time, they may not have ever worked at that particular store, which has a specific image and clientele.

At Macy’s, there are hints that we may see Story shop-in-shops. Shechtman has also been appointed Macy’s brand experience officer. But it’s not clear that much can be done to differentiate the brand experience at Macy’s.

After all, the customers who frequent Macy’s—middle-class middle Americans who have shopped there for years—may not be the same kind of people who appreciate Story, which so far has only one store, in downtown New York City.

Regardless, everyone agrees the department store sector is clearly in need of a dollop of creativity, and this may provide it.

On a recent well-worth-reading discussion on RetailWire, one commenter, Lee Patterson, executive vice president at WD Partners, even saw it as department stores getting back to basics:

What STORY does and has always done is what department stores should’ve been doing all along! They got away from it because [former Macy’s chairman Terry] Lundgren thought they could be mass merchants but, in fact, it was department stores that used to tell stories about brands and ideas and they were the best at it in their heyday. So in essence, Macy’s bought STORY (Rachel, really) to help them do something that they invented.

And yet, even as Macy’s moves to re-embrace storytelling, another commenter, TSi Co. CEO Art Suriano, cautioned that it also needs to pay attention to the other basics:

What I find interesting is that retailers are making all these investments today in an attempt to create a better in-store experience, and yet the one thing most of them lack is having enough in-store staff that are well trained and know how to put the customer first. The need to do a better job of staffing stores is very apparent. Too many retailers ignore it.

That’s an important point. For brick-and-mortar retail to survive, it needs  to focus not only on theatrics and novelties but also on viewing staff as a key asset, so that each visit is not just entertaining but genuinely useful as well.

When a consumer visits a retailer and finds helpful, well-trained staff, that’s often the most welcome—and rarest—in-store experience of all.