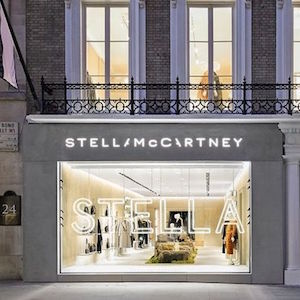 LVMH has bought a minority stake in the Stella McCartney brand, a year after the designer’s split with rival luxury conglomerate Kering.

McCartney will continue as the brand’s creative director and brand ambassador and will retain majority ownership, a statement said. She will also advise LVMH chairman and chief executive officer Bernard Arnault and the group’s executive committee on sustainability, it added.

The “full scope” of the new partnership will be announced in September, it said.

While primarily known for its clothes, the McCartney brand also produces jewelry, including an Alice in Wonderland–themed costume jewelry collection for Disney.

McCartney, the daughter of musician Paul, launched her brand in 2001 as a 50-50 venture with Gucci Group, which has since been renamed Kering. In March 2018, the conglomerate and designer went their separate ways, and McCartney became its sole owner.

“It is the right moment to acquire the full control of the company bearing my name,” she said at the time.

Now, she is back with another, even bigger conglomerate. McCartney didn’t explain the reason for change of heart, but said in a statement that the brand has received “many approaches” from interested parties since the Kering split.

“While these approaches were interesting, none could match the conversation I had with Bernard Arnault and his son Antoine,” she said. “The passion and commitment they expressed toward the Stella McCartney brand alongside their belief in the ambitions and our values as the global leader in sustainable luxury fashion was truly impressive.”

In the same statement, Arnault said the reason LVMH became interested in the brand was that McCartney “was the first to put sustainability and ethical issues on the front stage, very early on, and built her house around these issues. It emphasizes LVMH Group’s commitment to sustainability.”

In May, LVMH announced it was launching a luxury line with singer Rihanna.