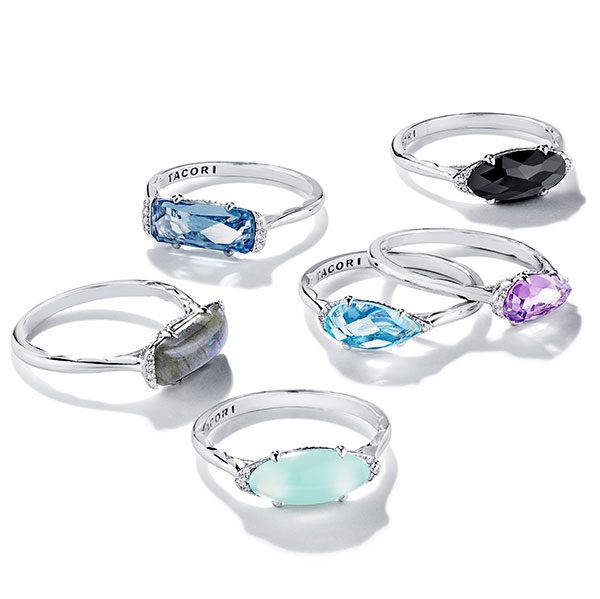 The 2018 LUXURY show, which opened May 30 at the Mandalay Bay Convention Center—two days earlier than its sister event, JCK Las Vegas—kicked off with a spirited breakfast presentation by Johnny Earle, aka Johnny Cupcakes, a Boston retailer who’s made a fortune selling $36 T-shirts in a former bakery that he scents with car fresheners to evoke the smell of vanilla frosting.

“Everyone’s competing to be more stuffy than the other person,” Earle told the audience. “People want fun.… They want a story.”

The emphasis on fun over formality may explain why numerous LUXURY exhibitors are promoting price point collections replete with colored stones, streamlined designs, and plenty of movement, mostly intended to entice contemporary buyers.

A similar effort is unfolding at Mastoloni Pearls (LUX-532). Between the New York City–based brand’s new Luna collection pairing white moonstones with freshwater cultured pearls and its new Stella (“star” in Italian) and Altalena (“swing” in Italian) lines, the emphasis, according to publicist Fran Pennella of Benali Consulting, is on “more approachable pieces” that are “a little bit more modern, with longer lengths, rose gold, and movement.”

Parade Design (LUX-1121) showed a range of accessibly priced colored stone solitaires from its Parade in Color collection, including a dainty emerald and 18k yellow gold style that retails for $925.

“It’s less of a commitment,” marketing coordinator Lyndsay Hirsch said. “You don’t have to think that hard about it; it’s more of an impulse purchase.”

The Los Angeles–based manufacturer went a similar route with its bridal line, which now includes an expanded Lumiere collection of rose-cut diamond engagement rings that retail between $2,000 and $3,000, including center stone.

“It skews a little younger, a little hipper,” Hirsch said, adding that stackable rings and “more delicate pieces” are moving.

Tacori (Breakers LK) got the price point memo as well. Not only is the mega-brand drawing attention to its new Horizon Shine collection of silver rings featuring ­diamond-accented colored stone centers with east-west settings—“Everything you see here is less than $500,” said COO and design director Nadine Arzeounian—but it’s also promoting a new Coastal Crescent bridal collection, which opens at $1,490 in 14k gold, making it the only collection from Tacori available in the metal.

At Design@LUXURY, a new area in the Oceanside Ballroom devoted to up-and-coming designers, Los Angeles–based Rosa Van Parys (LUX-2112), an Ecuador-born architect and interior designer–turned–jeweler, made her national debut with a collection defined by her tagline: “Elegance with an edge.”

From a slew of chainmail rings to a range of pearl pendants and earrings studded with gems, the pieces are bold, lengthy, and unapologetically sexy.

“I love pearls, but pearl lovers want to kill me because I drill them,” Van Parys said. “It’s part of our artistry.”