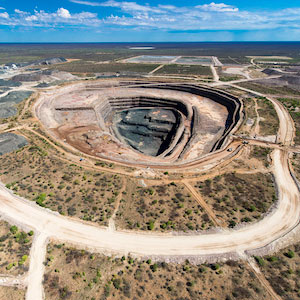 On July 15, Lucara Diamond, owner of the Karowe mine in Botswana, announced it had forged a “groundbreaking” deal with Antwerp Belgium’s HB Group. The deal calls for Lucara to sell all its “special” (more than 10.8 ct.) diamonds to HB through the end of the year.

That’s a big deal for HB, as Karowe has unearthed a lot of very special specials, including the 1,109 ct. Lesedi La Rona. But it’s also a big deal for Lucara, which derives 70% of its income from larger stones.

But the interesting thing is how this deal is structured. It calls for HB to initially pay Lucara an estimate of the diamond’s eventual polished price—determined through “state-of-the-art scanning and planning technology”—minus HB’s manufacturing costs and an unspecified commission, which it’s also called a “fee.” HB will pay Lucara that initial estimate within 60 days of receiving the stone—a rare instance of a diamond miner extending credit.

On an earnings call Tuesday, Lucara chief executive officer Eira Thomas described the deal as a response to “a supply chain that is frankly, a little broken.

“You have participants along that value chain really making their margins on the backs of someone else,” she says. “We’ve long recognized the importance of creating better alignment [between miner and cutter]. What we are essentially doing here is using technology to take the guesswork out of buying rough diamonds, and we’re creating a more streamlined, efficient value chain.”

Thomas says that both Lucara and HB will be “incentivized to maximize the value of the resulting polished.” If the eventual sale of the reluctant polished is higher than what Lucara paid, Lucara gets extra—though if it’s lower, HB takes the loss.

“[HB’s analysis] will have some inherent conservatism in it,” said Lucara’s chief financial officer and corporate secretary Zara E. Boldt on the call. “They’re unable to recover amounts for which their estimate exceeds their actual selling price.”

Lucara declined comment beyond its release and conference call, and HB could not be reached for comment by publication time. However, industry analyst Paul Zimnisky believes the deal is good for both parties—but particularly Lucara, which has held most of its specials off the market in the second quarter due to COVID-19. Since specials are inherently rare, and there is a limited market for them, they can be difficult to value, he says.

“When miners sell their rough, there’s usually an inherent discount built in the price,” he says. “The manufacturer says, ‘I don’t know where the polished market’s going to be by the time I sell this. Therefore, I need to protect myself. I’m only willing to pay a certain percentage of what I think I’m going to be able to sell the polished.’

“With the way that this agreement is set up, Lucara is basically going to get part of whatever the polished sells for. So, that discount or that margin of error that the manufacturer factors in when they buy rough essentially goes away with this arrangement. The manufacturer doesn’t have to take the polished market risk they would if they just bought the rough up front. Theoretically, the miner should be getting more for their rough.”

Thomas pointed out that polished prices have generally held up better than rough prices, and the deal will give Lucara guaranteed cash flow.

What’s in it for HB, which is still taking a bit of risk? “It’s the same reason De Beers sightholders take long-term contracts,” Zimnisky says. “Why do they do that? Because they got consistent supply. If you’re an exceptional diamond manufacturer, you’re getting all of the exceptional diamonds from the top diamond mine for producing special stones.”

HB is also getting its manufacturing costs underwritten, plus the commission/fee. (To truly align the pair’s interests, it would likely resemble a commission more than a flat fee, as HB’s haul would increase with the sales price. Lucara isn’t saying.) Given manufacturers are perpetually complaining that their profits are squeezed, this may net HB more than the standard miner-polisher arrangement. On the other hand, Lucara also believes it will also receive better prices for its goods, and that has to come from somewhere.

This arrangement seems very much a test: It’s running through the end of the year only. There’s no indication if it will continue beyond that.

On the call, Thomas said she doesn’t believe her company will totally give up tenders or its other selling tools but will use a mix of channels.

“There are times that it would make sense, and it’s very appropriate to tender goods. And there are other times when it makes more sense to sell goods through [Lucara’s rough sales platform] Clara or through an agreement like with HB. But we definitely feel the harmonization within the supply chain is necessary and that this is where the whole industry has to start going.”

Certainly, while having a guaranteed buyer is nice, there’s no guarantee your guaranteed buyer can handle everything nature coughs up. In November 2015, the same week the Lesedi was found, Karowe also produced a 815 ct. stone. That would be quite a plateful for even the heartiest manufacturer to digest. In the unlikely event Lucara again hits a double jackpot, tenders might be a more attractive option.

There’s long been discussion about the industry’s standard methods of selling rough—sights and tenders. This seems like a new, innovative model. Thomas noted that even De Beers wants to adjust its sight system, with Mark Cutifani, CEO of parent company Anglo American, saying the diamond “value chain needs to evolve to suit the times.“

There’s no indication that De Beers is interested in this kind of arrangement. But I wouldn’t be surprised if it keeps an eye on it.

Top: The Karowe mine in Botswana (image courtesy of Lucara Diamond Corp.)